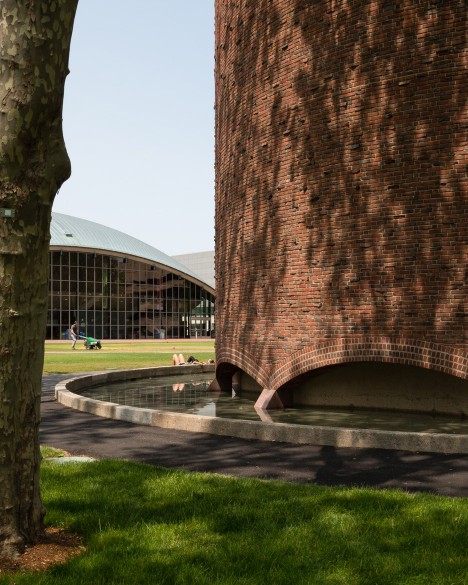 Undulating brick surfaces are concealed behind the smooth, windowless exterior of this chapel by Modernist architect Eero Saarinen, captured in these new images by British photographer Jim Stephenson (+ slideshow).

Located on the Cambridge campus of the Massachusetts Institute of Technology, the MIT Chapel was completed by Finnish-American architect Saarinen in 1955.

Externally the building is modest – a cylindrical brick volume with a moat around its base and no windows.

But inside the structure features walls that curve back and forth, and a skylight that brings in a dramatic shaft of light.

“On the surface, it’s a pretty simple building, but what Saarinen does with light and scale is almost breathtaking,” explained Stephenson, who visited the building last month for the first time.

“The feeling you get when crossing the threshold between the light, low corridor and the dark voluminous chapel is incredible,” he told Dezeen.

The chapel sits alongside MIT’s Kresge Oval and Auditorium, which Saarinen also designed. Its curved form breaks the otherwise orthogonal grid of the university campus.

A spire by sculptor Theodore Roszak sits on the building’s roof, while the centrepiece inside is a sculpture by artist Harry Bertoia.

A glazed corridor provides the building’s entrance, but the threshold to the chapel is marked by a distinct change in lighting conditions.

“I’m continuously fascinated by how different architects manipulate space, and us, to create a particular sensation on entering a building,” said Stephenson.

“The pay-off comes when you step over the threshold into the chapel and the ceiling opens up, the windows disappear – replaced with undulated brickwork – and a beautiful, solitary shaft of natural light faces you, illuminating the altar.”

Water from the surrounding moat enters the building through a series of low arches. Other details include travertine floors, a marble alter and a custom-made organ from prolific manufacturer Walter Holtkamp.

Eero Saarinen was born in Finland and emigrated to the United States when he was 13 years old. His most famous designs include the Gateway Arch in St Louis and the TWA Flight Center at New York’s JFK Airport.

He completed the MIT Chapel six years before his death in 1961, while undergoing an operation for a brain tumour.