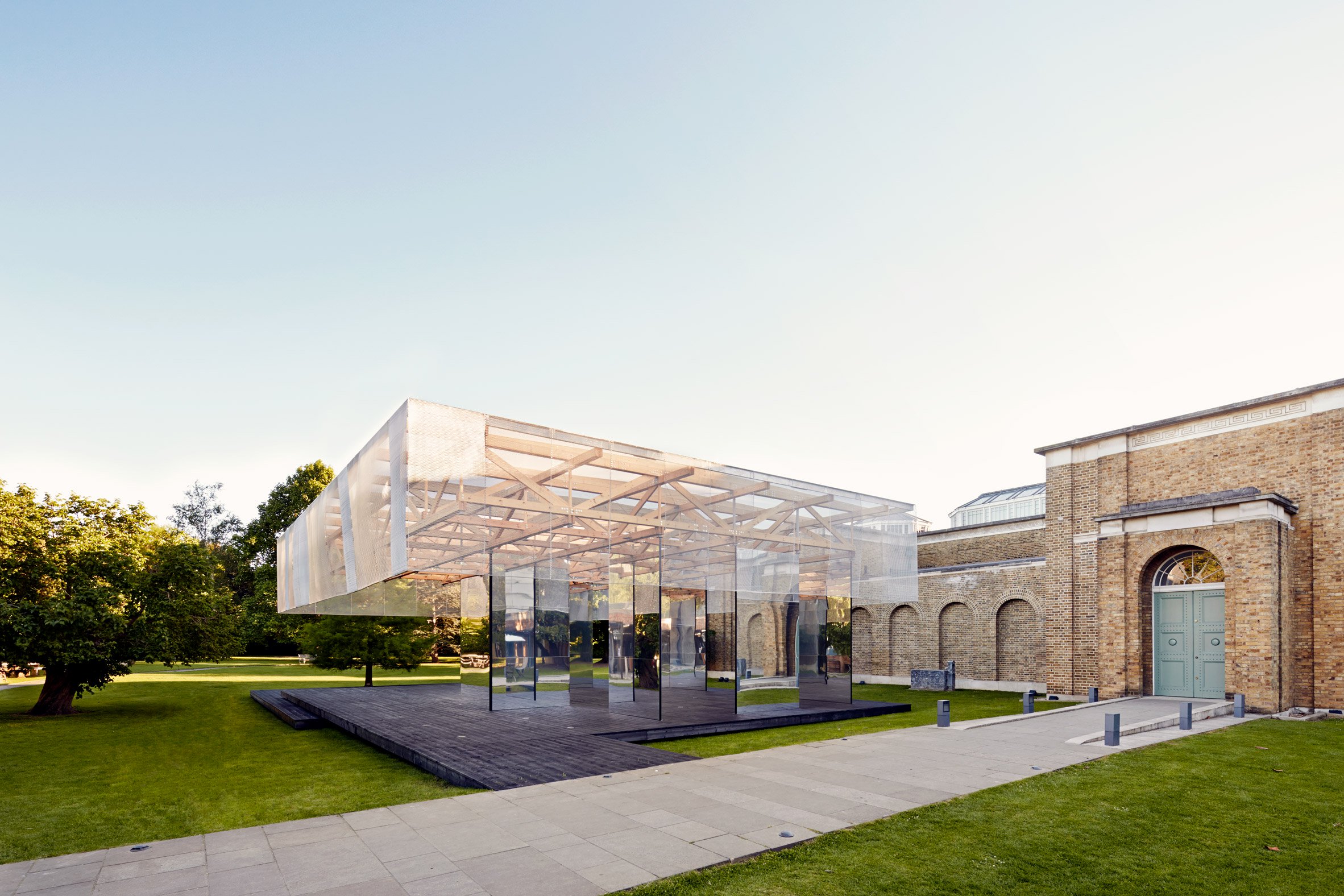 IF_DO has designed a mirrored events pavilion in the grounds of John Soane’s Dulwich Picture Gallery in south London, which was unveiled this morning ahead of this year’s London Festival of Architecture.

Designed by London-based practice IF_DO to celebrate the 200th anniversary of the gallery‘s opening, the Dulwich Pavilion features reflective panels that mirror the building’s brick facades and is described as a “lively marriage of moving mirrored screens”.

The art gallery was designed in 1811 by British architect John Soane and claims to be the world’s first purpose-built public art gallery. It features facades of London stock brick with Portland stone detailing.

“Conceptually it responds to the solidity and monolithic nature of Sir John Soane’s gallery building, and the porous, ever-changing nature of the landscape.”

Three mirrored panels support a broad timber-framed roof above a wooden deck, while further moveable panels allow the space to be reconfigured for different events.

Metal mesh panels extend down from the roof to define the perimeter of the space, which includes a bar and cafe area known as the Pavilion Bar.

“The timber-truss roof and surrounding veil create a canopy-like environment, with their shadows – and the reflections of shadows – adding to the layering of images, and to the interplay of space, perception and memory,” said the architects.

The pavilion was commissioned by the Dulwich Picture Gallery and estate agent Almacantar for the London Festival of Architecture, which kicks off on 1 June and will continue all month.

IF_DO worked with engineers StructureMode and fabricators Weber Industries on the 192-square-metre structure, which was completed in just one month and cost £110,000.

Steel, aluminium and timber elements were prefabricated off-site by Weber Industries in its Peckham studio to speed on-site construction.

IF_DO’s design, named After Image, was chosen ahead of over 70 entrants by a jury including chef Ruth Rogers, architect Carl Turner, Nancy Durrant from The Times newspapers and Almacantar CEO Mike Hussey.

“The Dulwich Pavilion brings together the world’s oldest public gallery and the world’s largest annual architecture festival,” said London Festival of Architecture director Tamsie Thomson, who hopes the pavilion will show visitors the “brilliance” of the capital’s architecture scene.

“It also marks our commitment to finding continually fresh and exciting ways of bringing art to life for all our audiences.”

The Dulwich Pavilion will be open from 2 June until 8 October 2017 and is free to visit. It will host a series of themed “Friday Lates” throughout June and July.

Photography is by Joakim Boren.