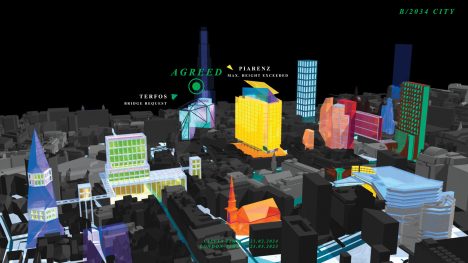 Graduate shows 2016: in this movie, Royal College of Art graduate Johnny Lui explains his concept for a digital planning system, which architects would play like a video game to get projects built in the real world.

Called Cilvia, Lui’s speculative planning tool – which he developed for the masters programme in architecture at the Royal College of Art – is a digital model of the City of London, into which architects could insert proposals for new buildings.

Any proposal that violated planning constraints would be rejected by the system, while compliant proposals would become viewable to architects working on other sites in the area.

“Cilvia is a virtual reconstruction of the City in which architects work, propose and plan buildings together,” Lui explains in the movie, which was filmed at the ShowRCA 2016 graduate show in London.

“It has a set of in-built rules that are based on existing planning and regulations. Things like demolishing listed buildings or blocking the view of St Paul’s Cathedral would be automatically picked up by Cilvia and rejected.”

Lui suggests that such a system would enable planners to assess multiple proposals simultaneously, while architects would be able to design new projects that relate to the future city as well as existing buildings.

He believes that such a system would enable London’s skyline to develop in a more considered and collaborative way.

“What I am critiquing is the reactive planning system we currently have and this kind of accumulation of permitted buildings,” Lui explains. “Why don’t we build the city in advanced virtually?”

“I’m speculating that this kind of environment will lead to a much less accumulative process and there would become a dialogue between architects, clients and planners.”

Lui compares the system to a massively multiplayer online (MMO) video game, in which players either work together or compete against each other to achieve certain objectives. He believes this would have a number of benefits over the traditional planning system, but predicts that architects would also seek ways of exploiting the game for their own benefit.

“Architects would essentially play the game in Cilvia to get projects built in reality,” he says. “They would develop a whole new series of tactics and strategies.”

Cilvia is currently only a concept, but Lui is looking to collaborate with developers and other architects to start building a prototype version of the software

“I think Cilvia will happen one day,” he says. “But it won’t happen without progressive architects getting together and getting behind technology and thinking in truly creative ways.”

This movie was produced by Dezeen for the Royal College of Art.

Cilvia was on display at the ShowRCA graduate exhibition, which took place from 26 June to 3 July 2016 at the Royal College of Art‘s Kensington campus. Dezeen was media partner for the event.