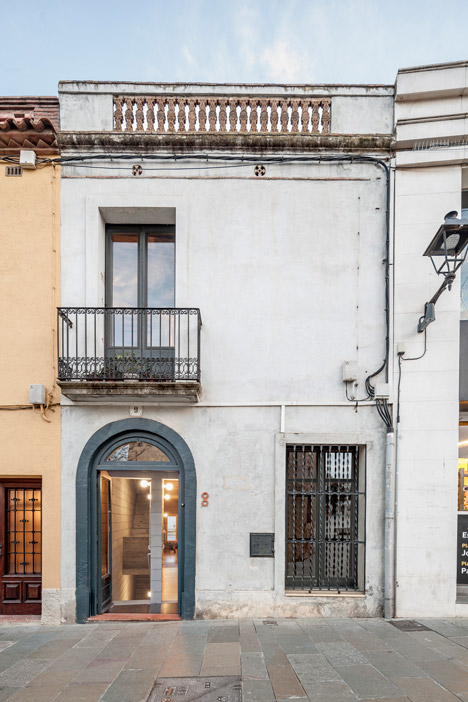 Concealed behind a historic facade, this narrow residence by Barcelona architect Josep Ferrando is wedged between the party walls of a pair of houses in the Spanish city of Sant Cugat.

The 225-square-metre residence fills a gap measuring less than six metres wide between two existing buildings in Sant Cugat – a town north of Barcelona that is also home to a picturesque Medieval monastery, an architecture school and a chocolate factory.

The proximity to Barcelona and the surrounding Catalonian countryside makes Sant Cugat a popular location, resulting in a dearth of land in the town centre.

This led Ferrando to squeeze the family home behind the facade of an old row house, right up against the walls of its two neighbours.

Entitled 176 House E+M after the names of the clients, the residence sits opposite the town’s Medieval monastery. The historic facade of the original property was preserved, and the new concrete block was built behind.

“Located in the historical centre of Sant Cugat, a house between party walls is a project sensitive to the inhabitant and the city,” said Ferrando.

“[It is] a fragment that fits with the complex urban conditions: the monastery, the cultural heritage of the street facade and the topography.”

An arched doorway in the old facade leads in from the street to an entrance hall that links with the family’s kitchen and dining area, as well as a narrow concrete staircase that descends to a basement living room.

Due to a drop in ground level across the site, the living room is sunk below ground at the front but sits slightly above a garden at the back.

An atrium area with the living room provides an additional source of daylight for the kitchen and dining area above.

Three house-shaped volumes made from chipboard are suspended within the upper floors of the narrow building.

These timber pods enclose a child’s bedroom, the family bathroom and a study that links with a roof terrace overlooking the garden. A pivoting flap opens or closes the child’s bedroom to the atrium, offering views over the kitchen.

Ferrando took inspiration from the Modernist architect Adolf Loos and his raumplan theory for this staggered arrangement of volumes.

Loos used the term raumplan to outline his belief that the composition of rooms within a building should not be dictated by standard floor levels, but instead set at a height that suits its use, creating buildings where “storeys merge and spaces relate to each other”.

“The horizontal slabs are adapted to the topography and the programme of the dwelling unit with a raumplan system,” said Ferrando.

“[It is] a unique construction gesture to build the entire home as if it were a hollowed piece of wood, shaped through light, void and visuals to interior and exterior.”

A network of timber shelves spreads across one wall of the residence, providing storage space for each of the levels and a visual link between the timber volumes.

The rise in land costs and the increasing density of cities has lead to a surge in construction of skinny houses like this one. Others have been constructed recently in South Korea, Australia and the UK.

“It’s amazing how important one inch of space becomes when you’re dealing with such a confined width,” American architect Simon Storey told Dezeen.

Photography is by Adrià Goula.