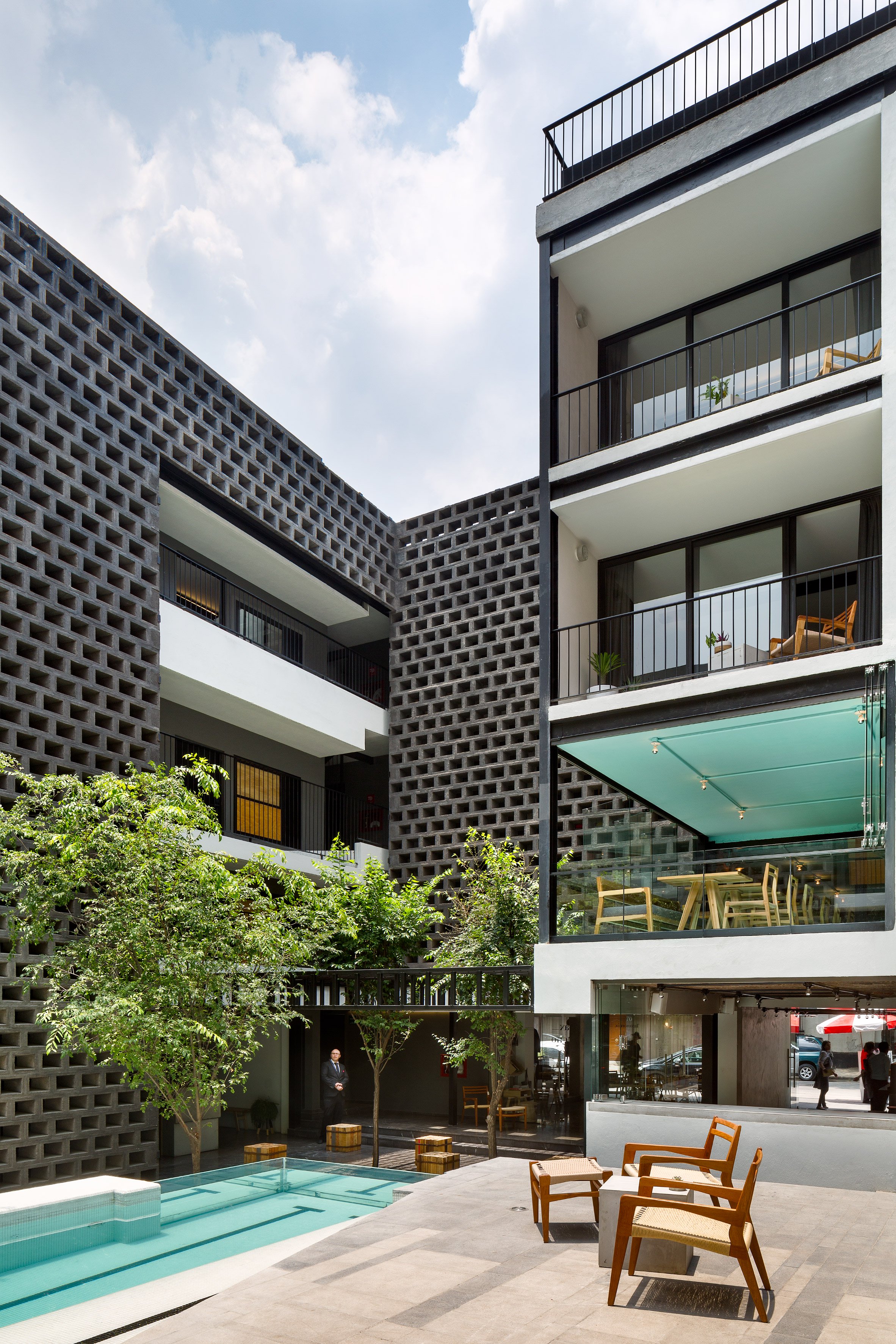 Lattices of dark blockwork wrap around a verdant courtyard and narrow swimming pool at this hotel in Mexico City, overhauled by local firm JSa.

Located in the Mexican capital’s Cuauhtemoc neighbourhood, just off the Paseo de Reforma thoroughfare, the building first opened in the 1970s as the Hotel Jardin Amazonas.

“We googled it right away and a couple of images from its splendorous times caught our attention,” said JSa, “mainly of the central courtyard that created an oasis within the city.”

The studio completed an “urban-archeological” project to turn the dilapidated building into Hotel Carlota.

A 1980s mirrored glass facade along the street was retained, but the inner spaces have been completely overhauled.

Reception is reached down a gentle slope through a four-storey space, where an industrial-style lift is included for transporting heavy luggage to the rooms upstairs.

“We decided to avoid the access through the facade and build a new one on the side in the neighbours’ parking lot,” said the architects, “to modify the route travel and cause astonishment by making the visitors reach directly to the central courtyard we had idealised in the photographs.”

Beyond the concrete desk is the courtyard, which is partially covered by a steel lattice that a tree grows up through and features a stool made from timber chunks.

A shop selling fashion and home accessories has glass walls that face both the street and the enclosed outdoor space.

Steps lead up to the raised bar area and a terrace with further seating. Along the change in level is a long thin swimming pool down the middle of the courtyard.

A portion is shallow for paddling, while the other section is deep enough for swimming lengths. At one end of the pool, a transparent corner reveals swimmers underwater.

At the back, behind one of the breeze-block walls, is a cosy library furnished with colonial-era pieces.

Above a ground-floor kitchen, the indoor section of the restaurant is painted turquoise to match the colour of the pool below. A further dining area extends like a balcony over the bar to overlook the courtyard.

“The central courtyard becomes the busiest public space, having the restaurant all around, which is designed under the same criteria of the hotel and with furniture specifically made for this place,” said the studio, which has also designed a block of glass-fronted apartments and a walnut-lined library wing in Mexico City.

Circulation spaces are tucked behind the blockwork on the levels above, with gaps allowing limited views out.

The 36 rooms vary in size, but all feature a pared-back aesthetic created by concrete floors, white walls and minimal furnishings. The interiors were completed as a collaborative effort between a handful of Mexican design studios.

The hotel reopened in June 2015, and provided a hub for guests to this year’s Design Week Mexico from 5 to 9 October 2016.

Also during the event, a stack of empty coffin-like boxes was installed outside Museo Tamayo and a perfume bottle comprising two reusable parts was launched.