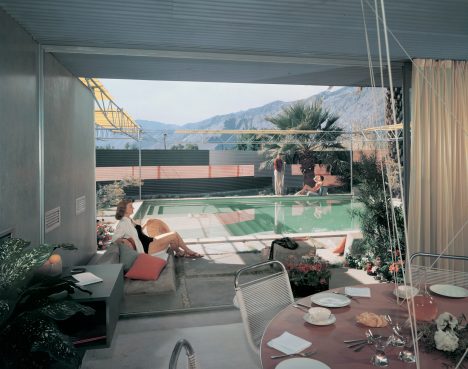 His photos of their projects present both architectural features and the behaviour of their inhabitants. These pictures helped to shape the image of the Southern Californian lifestyle during the 1950s and 1960s, which spread to the rest of the country and the world.

A series of Shulman’s photos uncovered from his personal archive were published as a book in 2000. Following his death in 2009, the set has been expanded into three volumes titled Julius Shulman: Modernism Rediscovered – available now from Taschen.

“Paying tribute to residential and commercial buildings that had slipped from public view, Shulman’s stunning photographs uncovered a rarely seen side of California Modernism,” said the publisher.

See a selection of Shulman’s photos of Mid-century Modern buildings from California and across the US, along with the photographer’s notes, below:

A disciple of Swiss-French architect Le Corbusier, Albert Frey moved to Palm Springs in 1934 and built his own house in the desert city in 1941.

Shulman photographed Frey’s home throughout the progressive stages of its development, which included the addition of a spacious living-sleeping area and a solarium, a swimming pool outside, and a garden pool within to the original three-room nucleus.

The Dome House is named for its aluminium and glass hemispherical covering, which brought architects Paolo Soleri and Mark Mills wide recognition for incorporating passive principles in heating and cooling.

The influence of their mentor Frank Lloyd Wright can be seen in the use of boulders and concrete, with the most unusual structure housing the bedroom.

This 1,200-square-foot (111-square-metre) hillside house was designed as a single studio for living and working.

A large storage wall with perforated doors housed the television, books, paintings and sculpture, while plywood floors were covered in cork, and heat was provided by a screened fire bowl in an iron tripod with a copper hood.

Schulman’s first wife Emma and daughter Judy feature in the photos of this beachside house, demonstrating his common use of people in his images.

“Typical of the early coastline, this view portrays the isolation of the early ‘settlers’,” said Schulman. “As far as the eye can measure, the coastline disappears under and beyond this brilliantly designed modest beach home.”

The Roberts Residence’s interior spaces were minimal and primarily oriented to beachfront living and entertaining, but the home destroyed in a flood.

Shulman used several structures create the composition of this photograph, which aimed to represent a particular moment in the history of New York City architecture.

Shot from the colonnade of Mies van der Rohe‘s Seagram Building, it shows the glass Lever House tower beside an older Art Deco skyscraper – a juxtaposition that was occurring across the city at the time.

Greene built his house for his family half a mile from any other dwelling, using organic shapes to create a structure that is “awesome yet friendly”.

The shingle-sided home was meant to withstand strong prairie winds, and was nicknamed Prairie Chicken House for its shape by Life magazine.

“This 1961 structure created an architectural sensation,” said Shulman. “There was nothing about this house that resembled any other home ever created.”

The glass and steel skeleton used by Mies van der Rohe for his high-rise buildings was expressed as projecting mullions at this housing development.

The architect exaggerated these elements to enhance the shadows on the reflective facades.

“Mies was extremely pleased with how I demonstrated his design for the separation of the two elements of his total structure,” Shulman said.

The curved roof of this two-storey house was created by architect Herb Greene as “the attempt to evoke a certain kind of aspiration”.

Inside, the rooms opened onto one another and to the views, while curvaceous ceilings and walls softened the space and modulated sound.