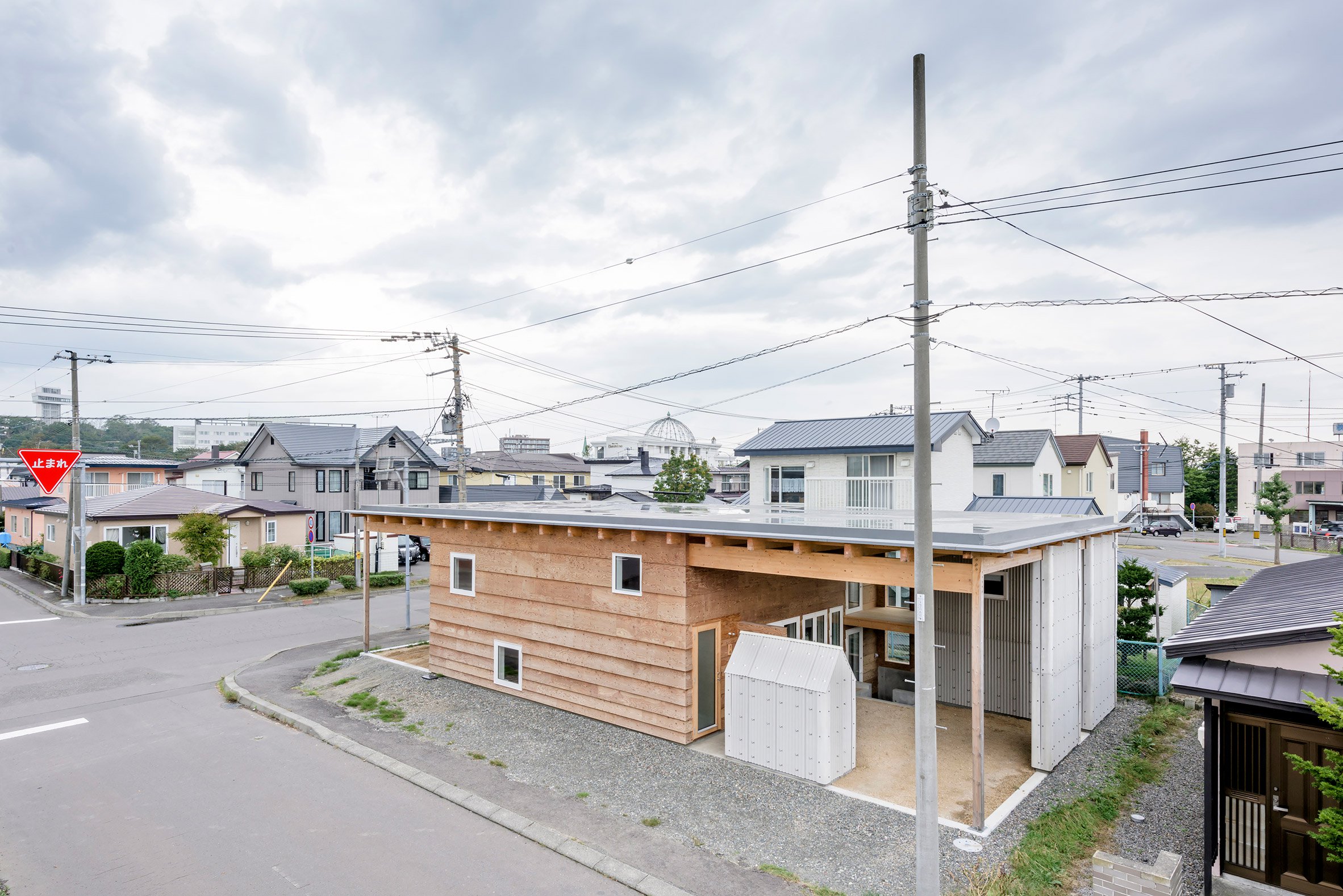 Jun Igarashi Architects found a work-around in Japanese building code to create this house on Hokkaido’s southwest coast, which features a larger than average roof to protect a pair of patios from snowfall.

Winters in Hokkaido, Japan’s northernmost island, are renowned for their snowfall. Snow-sports enthusiasts from around the world flock to experience the waist-deep powder that typically blankets the mountains, blown in on winds from Siberia crossing the Sea of Japan. But for residents, the snow can pose a problem.

“Snowfall gives various restrictions to our life,” explained Hokkaido-based architect Jun Igarashi, who designed the home named Roof and Rectangular House for a client in the port city of Tomakomai.

“The most serious of them is cleaning snow. Houses are often built mainly in residential areas. That means that the building coverage ratio is low. Therefore, the size of the roof becomes smaller.”

Building-coverage ratio rules in Japan stipulate that the footprint of the building has to be proportional to the size of the land it sits upon.

Igarishi thinks that these building codes should be abolished as small roofs leave little overhang to protect outdoor areas from snow.

“Life in snowy land is dramatically improved by doing away with rather than easing of the building coverage ratio,” he said.

To demonstrate his theory, he worked with the current restrictions to create a home that is both practical in a snowy climate but enjoyable to live in.

The large roof maximises the built upon space available under the building-coverage ratio, with a smaller, compact one-room dwelling space below it. This timber-framed structure is clad in a combination of weatherboards and corrugated metal sheets.

“Between the interior space and the outdoor space there is a rectangle under the large roof,” explained Igarashi.

“Although this space is treated as an indoor in the building code, physically it can be said that both outdoor and indoor, semi-indoor and semi-outdoor.”

“The rectangle under the roof responds to the pleasure of life both summer and winter. And it will connect life with the city and the earth space. It is also an attempt [at the] possibility of an intermediate area,” said Igarashi.

Practically, the occupants can park their car in the smaller sheltered terrace at one side of the building. Large windows also open out on to this space from both floors of the house, where residents can perch to observe the outside without having to leave the warmth indoors.

The larger terrace includes sheds for storing tools and bicycles and a large terraced space, accessible via doors in the living area, for sitting outdoors while remaining sheltered from the elements.

The dwelling space itself is arranged around an open-plan living and dining area, and a sunken kitchen. Like the home Igarashi designed for a family in Sapporo, the interior features a combination of exposed timber surfaces and white-painted metal.

Codes stipulate that foundations must be built below the frost line, so by lowering the kitchen area into this space there is enough ceiling height above it for a gallery. This runs along the length of the building leading to a mezzanine study overlooking the double-height living space.

“The code primarily corresponds to performance, not to pleasure,” Igarashi said. “Some people think it is natural, but I think that it is natural to think that its criterions [should be] for the purpose of people’s pleasure.”