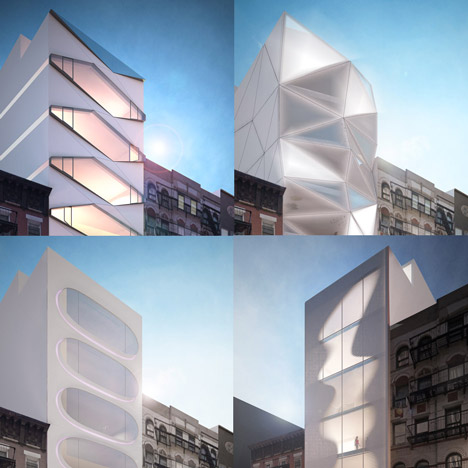 New York designer Karim Rashid has asked his Facebook fans to select their preferred option from four facades for a building in the city’s SoHo district.

Rashid is currently developing the design for a seven-storey structure at 30 Thompson Street, sandwiched between historic buildings on a narrow plot. The building will include seven apartments – one on each floor – and is earmarked for completion in 2017.

“For being such a large city, NYC is really many small communities made up of very vocal, opinionated residents,” he said. “Hearing public feedback can be difficult because people are so mired in the past – they don’t want to embrace change.”

The Egypt-born designer decided to ask the opinion of over 415,000 fans on his Facebook page, presenting them with four options for the building’s street-facing facade.

“It is a great opportunity to get feedback for my work and I believe we live in the age of ‘the empowerment of the individual’ where we all have a voice in the digital age,” he said.

Yesterday Rashid announced that option A had been selected by himself and developer Mavrix Group based on the public vote, and other factors such as budget and technical parameters.

Last month, Rashid and the developers whittled down 10 initial concepts to four designs that vary in appearance and estimated cost. Images of each were then posted onto Rashid’s public Facebook profile, and the designer asked followers to vote for their favourite and provide feedback on the designs.

Option A featured a vertical row of large parallelogram-shaped windows, while B was made up of faceted triangular panels of varying opacity.

“B has some criticism by a very few that it is similar to the facade for the Citroën showroom in Paris,” said Rashid. “I find it interesting how if there is a facet, then one immediately finds a similarity. As soon as we do something unusual or more radical people are ready to compare and criticise.”

By involving members of the public in the decision-making process, Rashid hopes the project will gain the approval of local residents and have an improved chance of being built.

“I have had too many failures and have learned that design is a collaboration. One must listen and work within that culture or nothing will go to market or get built,” he said.

By using social media, Rashid aimed to make it easier for those wishing to voice their opinions to do so without attending a long meeting.

“What we’re doing on Facebook is just a more open/public version of what the design industry has been doing for years,” said Rashid. “I always refused to witness the tedious focus groups that large companies use to critique designs but from it and as a designer, I am hired for a reason, for my expertise and vision to shape better lives.”

“Focus groups can destroy and end projects but if the feedback is overwhelmingly positive you know the project will be successful.”