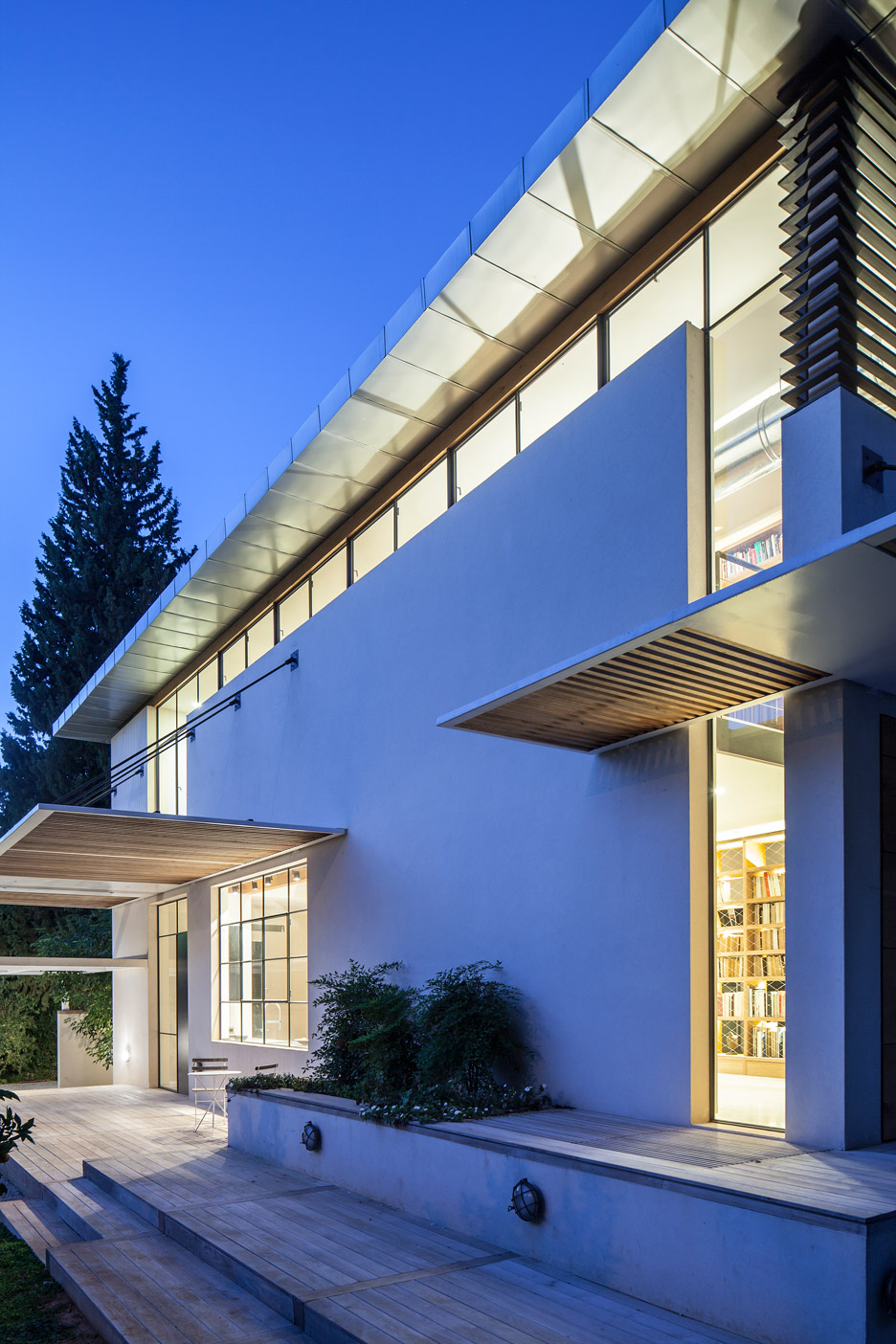 Tel Aviv architect Kedem Shinar drew on Israel‘s Bauhaus architecture and her training in Japan to create the clean lines of this bright white house in Carmey Yossef (+ movie).

The 350-square-metre residence is set on a plot surrounded by pine, cypress and olive trees in Carmey Yossef, a settlement between Tel Aviv and Jerusalem.

For the design, Shinar took her cues from the International Style developed at the Bauhaus – the renowned German art school that ran between 1919 and 1933. Over 4,000 Bauhaus-style buildings were constructed in Tel Aviv between 1920 and 1940, according to the city’s Bauhaus Centre.

Gridded glazing, suspended porches and concrete give CY House a semi-industrial aesthetic, and reference the Bauhaus school building in Dessau.

“The design idea, which draws inspiration from Japanese architecture, the De Stijl style and local Bauhaus architecture, was to merge the light and the landscape with the space of the house by using an interplay of walls and openings,” explained Kedem Shinar, “some transparent and some opaque, a play of open and closed, and exposed and protected.”

Inside, a black grand piano takes centre-stage in the Eames-inspired interior, which features a double-height living space. Two bedrooms and bathrooms are located off this central living space.

A bridge spans the double-height lounge and provides a reading nook behind the upper portion of a floor-to-ceiling bookshelf.

The back of the bookcase is enclosed with wire mesh – a material also used by Tel Aviv architect Pitsou Kedem to give a utilitarian appearance to a flat once owned by Israel’s first prime minster. Kedem’s own house takes its cues from its Modernist neighbours.

The timber bridge runs parallel to the exposed metal piping on the ceiling and is accessed via a black iron staircase, which continues up to a terrace on the flat roof.

A row of clerestory windows set just below the roof line is designed to create the impression that the stepped aluminium roof is hovering over the building.

“The roof planes seem disconnected from the walls, as they hover and float over the light that envelops them all around,” said the architect.

Downstairs, the exposed concrete floor runs between the interior and exterior and windows span floor to ceiling in an attempt to break down the visible boundaries between inside and out.

Kedem Shinar was born in Tel Aviv, brought up in Boston and studied architecture in Tokyo. Shinar worked for Japanese architects Toyo Ito and Kengo Kuma before relocating to Tel Aviv, where she worked at Mann-Shinar Architects and Skorka Architects, then founded her own studio in 2013.