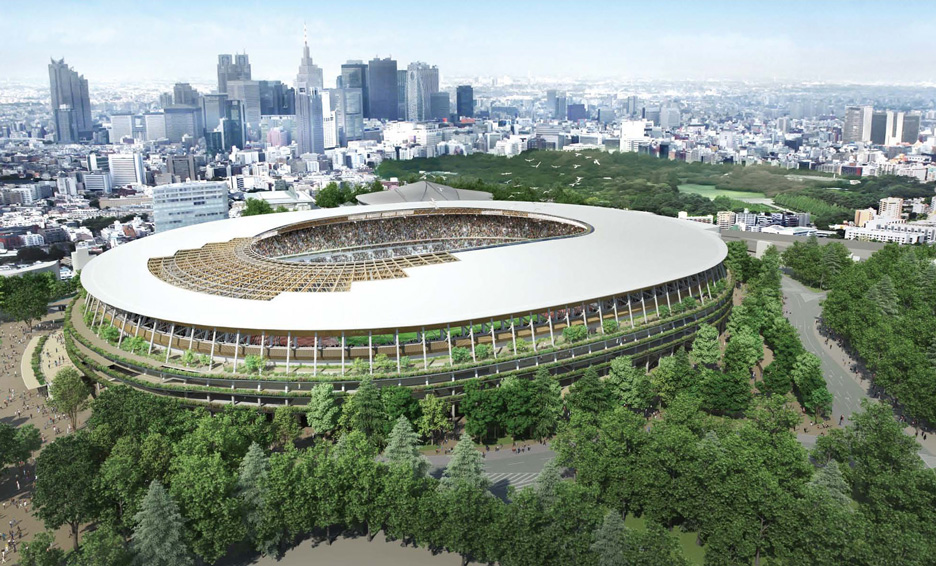 The Japan Sport Council (JSC) has revealed images of the two designs competing for the Tokyo National Stadium contract, which are by Japanese architects Kuma and Ito.

The two schemes were submitted anonymously to a new competition for the 2020 Tokyo Olympic and Paralympic Games stadium.

According to Dezeen’s sources, Ito is working with construction companies Takanaka, Obayashi and Shimizu on scheme A, while Kuma has partnered with Taisei Construction on scheme B.

Design A is a ring-shaped stadium with a latticed wooden roof, and an oblong well above the race trace and pitch. Rows of slender columns support the viewing terraces, which feature banks of planting. The scheme is estimated to cost ¥153 billion (£15.63 million).

Design B also features an oval plan and has an atrium surrounded by a wavering glass shelter. The design is estimated to cost ¥153.7 billion (£15.7 million).

The winner will replace the 80,000-seat stadium design by Zaha Hadid that was scrapped in the summer, even though the London architect had been working on it for over two years.

Ito and Kuma were among a host of high-profile architects and designers that petitioned against Hadid’s design in 2013. They claimed the stadium was “too big” for the city’s Yoyogi neighbourhood and that the architect’s design “could be better”.

Hadid teamed up with Japanese architecture and engineering firm Nikken Sekkei to renew its bid for the stadium in September, but was unable to enter the new competition as they couldn’t secure a contractor. Costs for the stadium began at ¥130 billion (£13.28 million) but rose to ¥252 billion (£25.74 million) in 2015. The two new teams must work to a revised budget of ¥155 billion (£15.83 million).

“They don’t want a foreigner to build in Tokyo for a national stadium,” Hadid told Dezeen at the time.