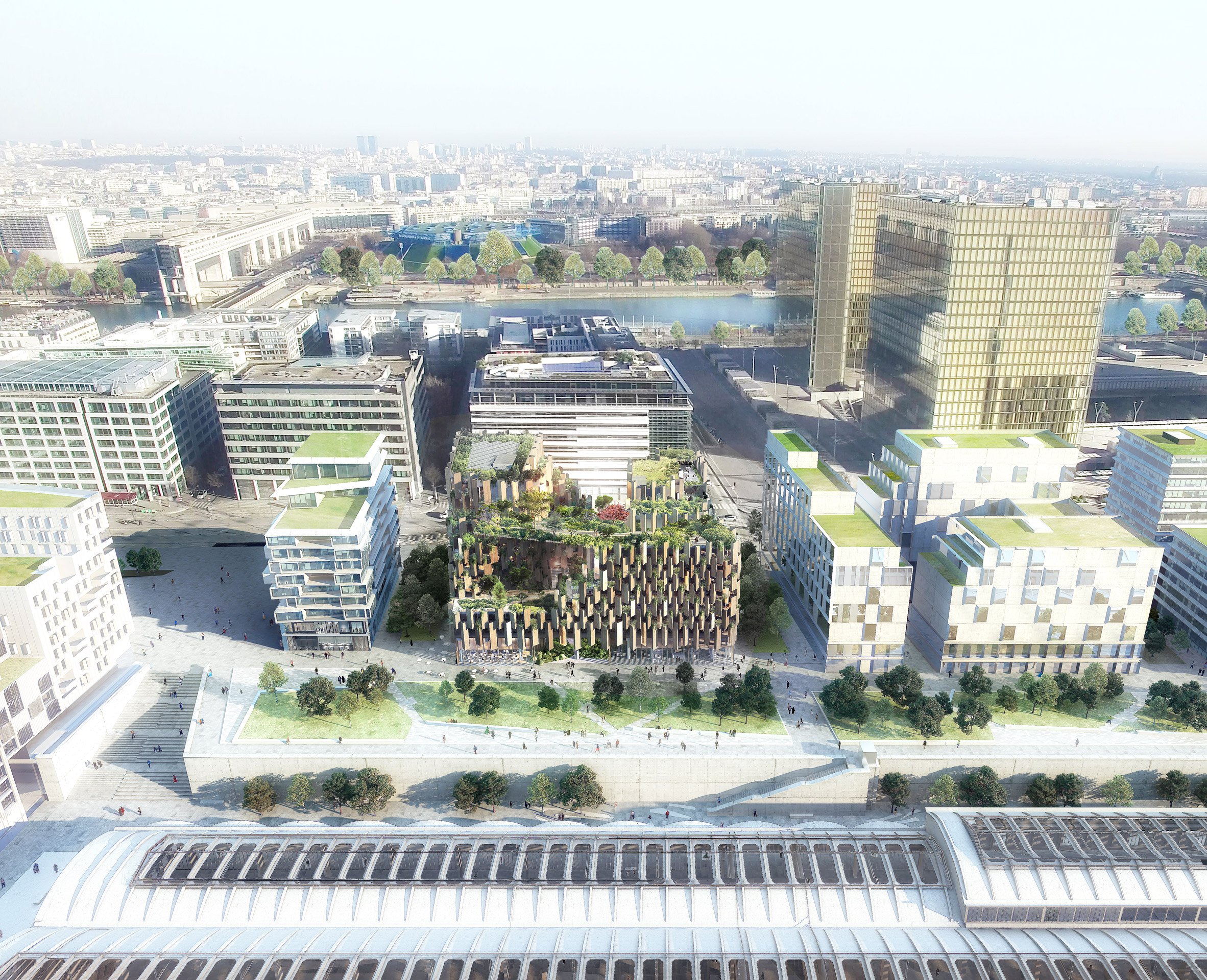 Plants will spill out between the overlapping wooden blocks that make up the facade of this hotel, which Kengo Kuma & Associates has unveiled for a site on the left bank of Paris’ river Seine.

Kengo Kuma‘s wanted the design of the Eco-Luxury Hotel to bring an abundance of greenery to the development in the Paris Rive Gauche neighbourhood.

In addition to the heavy planting on the exterior, a huge garden will also be set at the heart of the complex, providing retreat from the Avenue de France that runs alongside the site.

The garden will be placed between two of the hotel’s blocks, the main U-shaped 1Hotel and the separate youth hostel called Slo Living.

“In the dense urban context of the Avenue de France, we felt the need to create a green lung for the city,” explained the studio.

“Nature finds place at the core of the scheme, translated in the intimate public garden where all senses are awoken.”

Wooden fins with a triangular profile will be arranged vertically across the exterior of the building, leaving gaps for planting to grow in between.

The overlapping blocks will extend over the top and edges of the building to soften its outline. This effect will be enhanced by the inclusion of metal panels to reflect sunlight.

“As particles, dispersed facade panels together with the volumetric decomposition come to blur the shape of the building,” said the architects.

“The warm materiality of the wood is combined with the soften reflection and aerial touch of the metal panels. The building will come alive with the light,” they continued.

Balconies will occupy the space behind the wooden blocks on the street-facing side, which the architects designed to reference Paris’ traditional balconies.

The walls that wrap the central garden will be staggered in order to create a series of large terraces, as well as swimming pool.

These will be accessed by the hotel bedrooms, which are shown to feature pared-back interiors, including cantilevered wooden bed frames, wooden walls and floors and net curtains.

Lower floors will feature large expanses of glazing, opening the series of public spaces on the ground floor, like sports facilities, business incubators to the gardens. Other facilities include a restaurant, a co-working space and a roof terrace.

The Eco-Luxury Hotel follows a trend for plant-covered buildings, with recent projects including a luxury hotel in São Paulo by Jean Nouvel and a Beirut tower by Herzog & de Meuron.

Kuma ranked at number five on the Dezeen Hot List, a guide to the most-talked about architects and designers.

Earlier this year, the firm unveiled plans for a Turkish art museum made up of stacked wooden boxes, while other recent projects include the major expansion of the Portland Japanese Garden and the V&A museum in Dundee, which is nearing completion.

Renderings are by Luxigon / Mir.