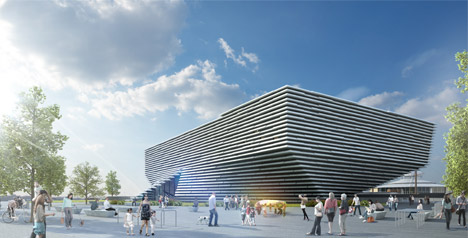 News: the cost to build a new outpost of the V&A museum in Dundee, Scotland, has almost doubled to the sum of £80 million – a figure that architect Kengo Kuma has claimed is “surprisingly high” (+ movie).

The original price tag for the new design museum on the city’s harbour was set at £45 million, but Dundee City Council has revealed that the cost is now estimated to be £80.11 million.

Speaking to Building magazine, the Japanese architect’s firm claimed the figure is far higher than it expected, but said it is “very pleased” that Dundee City Council, the Scottish government and the client body have decided to proceed anyway.

“The V&A Museum of Design Dundee is a very complex project, we have done extensive cost checking during the design process, and we have market-tested the major building packages with various contractors,” it told the magazine.
“Due to several factors, including inflation and current market conditions, the tender returned surprisingly high and this was unexpected even to the main contractors due to the complex nature of the project.”

Charitable organisation the Heritage Lottery Fund has now pledged a further £4.5 million towards the cost of the building to help cover increased building costs – in addition to the £9.4 million it awarded the project in January 2014.
“This generous support from the Heritage Lottery Fund represents a significant boost to the new museum… it opens the door to an impending site start,” said museum director Philip Long.
“The renewed support of our funding and founding partners underlines the momentum and determination driving forward V&A Dundee, which will do so much to change the fortunes of this city,” he added. “We can now look forward to getting on and building this outstanding new museum.”

Kengo Kuma and Associates won a competition in 2010 to design the V&A Museum of Design Dundee, beating REX, Sutherland Hussey Architects, Steven Holl Architects, Snøhetta and Delugan Meissl Associated Architects.
Despite gaining planning approval in 2012, the winning proposal had to be amended a year later in an early bid to prevent spiralling costs. The design, which originally featured a building sitting in the River Tay, was adapted so that only its prow projects out over the water.
At the time, Long said the move would “strengthen the connection between the river and the city centre”, but also that it would give “greater certainty with regards to the building schedule”.

Completion had been envisaged for late 2016, but the projected opening date has now been pushed back to June 2018.
In addition to the Heritage Lottery Fund donation, the Scottish Government has committed to £25 million of the overall cost – £10 million more than its original offer – while Dundee City Council has granted £6.5 million and public body Creative Scotland has contributed £5 million. An additional £15 million is being sought through fundraising.

“V&A Dundee will provide Scotland with a world-class museum of design while making a transformational contribution to the cultural, social and economic regeneration of the city,” said Carole Souter, chief executive of the Heritage Lottery Fund.
“We can now look forward to seeing this iconic building start to take shape and realising its full potential,” she said.

Construction is due to begin on site at the end of March. The project will form the heart of the £1 billion Dundee Waterfront regeneration project.
The post Kengo Kuma “surprised” after V&A Dundee costs rise to £80 million appeared first on Dezeen.