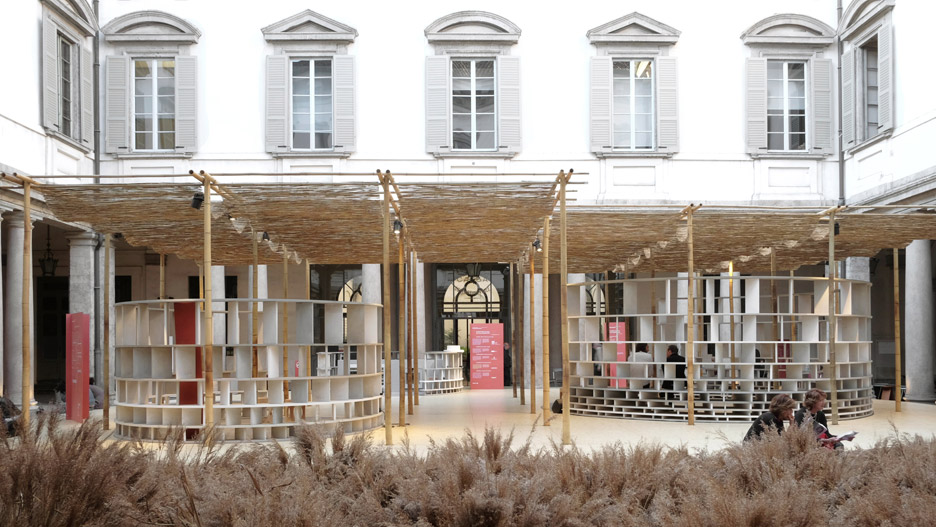 Milan 2016: an installation modelled on a typical African village has been built at Milan’s Palazzo Litta by Berlin architect Diébédo Francis Kéré (+ slideshow).

Situated in the courtyard of the Baroque building, Kéré Architecture‘s project is designed as a space for visitors to meet and interact.

Kéré grew up in Burkino Faso, and took cues from the social and spatial dynamics of villages in his home country to inform the design.

The Courtyard Village in Milan comprises a elevated platform surrounded by swathes of native Italian grasses.

Six varieties of stone, supplied by Italian company Casone, were used to construct the pavilions. The thin slabs are arranged vertically, spaced apart to prop up horizontal rings. The gaps between these elements increase in both height and width from the bottom to the top of the structures.

“In search of the ideal expression of material, the close collaboration between Casone and Diébédo Francis Kéré aims to reinterpret the most primitive construction method, piling stones, in an innovative and audacious way,” said the team.

“The name of the stool refers to a playful Burkinabé expression that discourages idleness,” said Kéré Architecture.

The 500-square-metre courtyard sits at the centre of Palazzo Litta, which was formerly owned by one of Milan’s noble families and hosted parties for figures including Napoleon Bonaparte and Margaret Theresa of Spain.

“I very much like the power of Palazzo Litta’s architecture, the welcoming courtyard and the spacious rooms where in every corner you discover surprises,” said Kéré. “This is an excellent setting in which to show contemporary design.”

The architect set up his Berlin studio after training in Germany, and the company works on projects across both Europe and Africa. Kéré Architecture’s previous installations include a retail space for shoe brand Camper inside a domed building at the Vitra Campus.

Courtyard Village is the centrepiece of an exhibition titled A Matter of Perception: Tradition as Technology, which was organised by Belgian design magazine Damn to “explore how homegrown traditions go hand in hand with modern technology”.

It will remain in place for the duration of this year’s Milan design week, from 12 to 17 April 2016.

The city’s impressive architecture is providing a backdrop for a variety of installations during the event. MAD has stretched colourful ribbons from the arcade of another palazzo, Nendo is presenting a collection of manga-influenced chairs in the surrounds of a historic cloister, and Hay’s latest collection is on show inside the vast La Pelota venue.