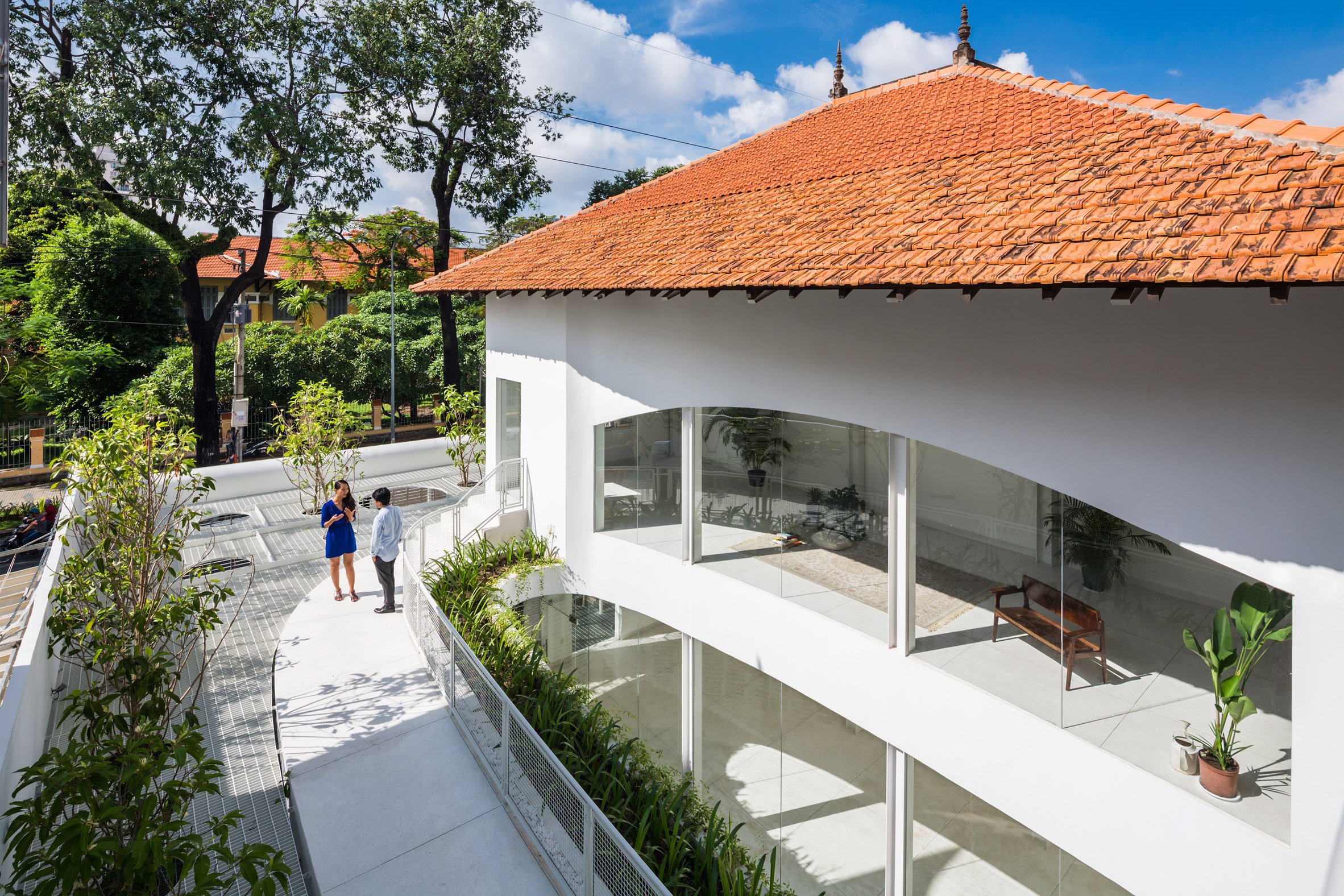 An elongated lightwell has been cut through this 1940s house in Ho Chi Minh City, Vietnam, which has been renovated by locally based architecture studio Kientruc O.

Called House D, the property comprises a 70-year-old two-storey house made of brick, and a perpendicular four-storey-high steel extension, which was added 20 years ago.

Kientruc O introduced the lightwell between the buildings to provide the residents with an outdoor space secluded from the busy city road that runs along the front.

To create the void, the architects added a roof above the front yard with a large curved opening at one side. The well runs along the front wall of the old existing brick house, which was removed and replaced with curved glazing to offer views into the space.

Curved balconies wrap the end of the void where it extends into the middle of the four-storey building.

“Confronted with the constant chaos of the city, the house juxtaposes against its urban context by introverting itself through spatial subtraction,” said the studio.

“Elliptical in geometry, the void carves along the horizontal side of the house toward the steel structure to the back, continuing upward to the roof, forming the receding pattern of the floors above,” it added.

Kientruc O founder Đàm Vũ, who designed the renovation for a friend, placed a pool surrounded by stones in the base of the lightwell. A perforated wall of stacked tiles wraps the pool, forming a buffer between the space and the road.

The roof above the old yard is made of gridded white metal that allows daylight to shine through, while circular openings provide gaps for trees to grow up through.

On this upper level, greenery is also planted along the edge of a paved walkway.

Inside the older residence, the brickwork and wood of the existing gable roof structure is left exposed and offset by the new white steel frame, white-painted walls and large, pale floor tiles.

Glazing runs along the curved balconies of the other building.

Kientruc O, which was founded by Đàm Vũ in 2003, has used a lightwell as the main feature of another residence in the city.

The studio introduced a central curved lightwell to bring plenty of natural light into a a narrow 3.5-metre-wide residence.

Other homes that make clever use of lightwells include a historic Brooklyn townhouse and a concrete house also in Ho Chi Minh City.

Photography is by Oki Hiroyuki.