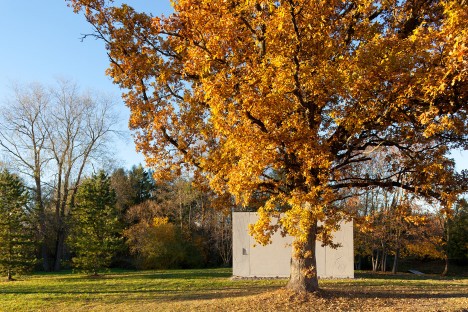 Kodasema creates tiny prefabricated house that moves with its owners

This tiny prefabricated dwelling by Estonian design collective Kodasema is designed to allow its residents to up sticks and move to a new location in less than a day (+ slideshow).

Named KODA, the mobile house prototype contains an open-plan living space and mezzanine bedroom within its 25-square-metre footprint, and also includes a built-in terrace in front of its glazed frontage.

The house is constructed with factory-made components, and can be assembled on-site without the need for foundations.

Kodasema hopes these features will keep both assembly and dismantling time under seven hours, making it easy for residents to relocate.

“Much of our quality of life depends on both our home and its location meeting our needs,” said Kodasema.

“When choosing where to live however, we may take risks on both fronts. It can be difficult to make major changes to a conventional home as inconvenient and extensive repairs are often involved, or even full demolition and reconstruction.”

“In our minds KODA can become whatever you want – a city-centre home, a lakeside summer house, a cosy café, an office, workshop or studio or even a classroom.”

The small lounge area sits directly behind the glazing, while the kitchen, bathroom and bedroom are set towards the back of the space to provide more privacy.

A ladder leads up to the sleeping area above the kitchen, which is just big enough for a bed.

“Its clever design provides the inspiration to make best use of every square inch of space and envisage how the built-in components, even the walls, can be adjusted to meet their purpose most effectively,” said the team.

Owners are encouraged to find a site with suitable water, sewage and electricity points. But the house is also designed to generate and conserve its own energy, so it can be used in remote settings for short periods of time.

The building’s quadruple-glazed facade maximises natural light while preventing heat loss, and roof-mounted solar panels are intended to return more power to the grid than the building uses.

KODA was first exhibited at the Tallinn Architecture Biennale in 2015, and has been shortlisted for the Small Project prize at the World Architecture Festival 2016.

Photography is by Paul Kuimet.

The post Kodasema creates tiny prefabricated house that moves with its owners appeared first on Dezeen.