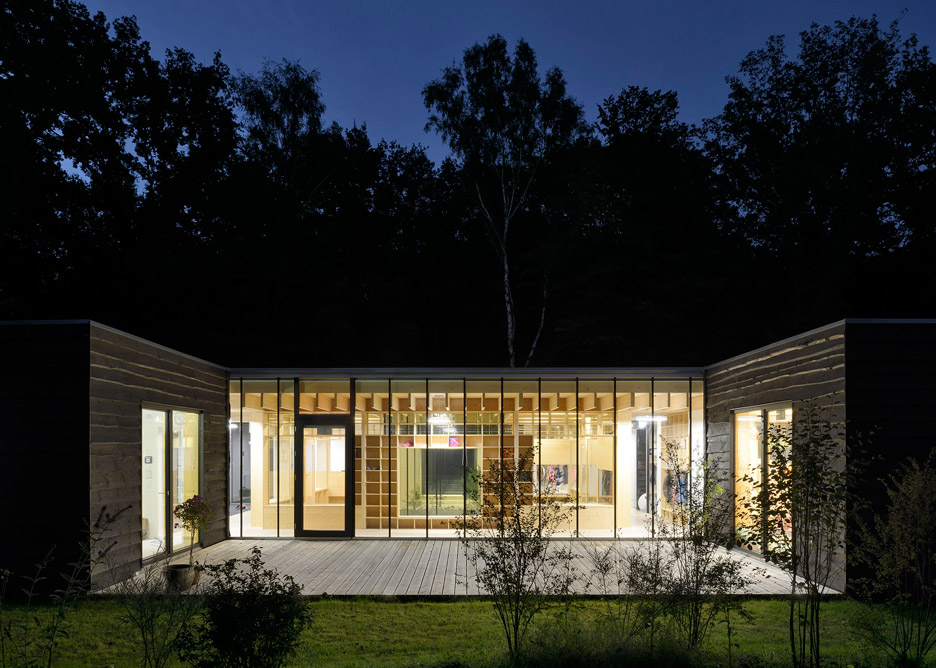 Roughly cut wooden planks clad classrooms arranged around a central glazed atrium at this nursery, set in a forested suburb in the German city of Hamburg (+ slideshow).

Located in the city’s northeastern Ohlstedt neighbourhood, the building was designed by local office Kraus Schoenberg after the architects were introduced to the client by the owners of a nearby house they had previously completed.

The nursery wanted to build a new facility within its large grounds to accommodate children ranging in age from newborns to three-year-olds. The plot is surrounded by large trees and a key part of the brief was to emphasise the relationship with nature.

Influenced by the small scale of local residences, the building is separated into a cluster of compact units accommodating different functions. These are positioned around a communal area with a glass-walled box containing a small garden at its centre.

“We wanted to create a series of interlinking spaces for the various users and to ensure that everyone is able to see each other through the cloister-like central space,” architect Timm Schoenberg told Dezeen.

The glazed volume at the heart of the building is surrounded by corridors that form the cloister. This open space is intended as the nursery’s main public area and a place for active play.

A wooden structure that surrounds the cloister contains built-in cubby holes and benches for children and parents. Large openings that puncture the wooden surfaces ensure plenty of views and light in both directions.

The interconnected feeling of the spaces is enhanced by glazed apertures that look onto and across the voids situated between the different rooms.

“Big square openings allow views from one children’s room to another via the external atriums,” said Schoenberg. “We were trying to achieve a sense of connection with the other children, a bit like on a street with pedestrians on opposite sides of a road.”

A staff room situated next to the entrance has windows incorporated into three of its walls so the staff can look out in all directions towards the garden, entrance and teaching areas.

On the side of the entrance is a kitchen and storage spaces. The classrooms occupy the remaining blocks and are each adjoined by a quiet room and lavatory.

The use of glazing throughout the project ensures a constant visual connection with the surrounding woodland. Terraces integrated into the spaces between the various wings are accessible from the cloister and the kitchen area.

Wood is used for the majority of the surfaces to emphasise the link between the building and nature. Glue-laminated beams supported by eight solid timber columns at the centre of the building extend across the ceilings, while the walls are clad with Finnish plywood.

Rough-sawn larch boards cover the exterior of the solid volumes, creating surfaces with a tone and texture that complements the building’s natural environs.

Woodlands are popular settings for nurseries and schools. Other examples include a school sports hall with a timber structure that frames views of the surrounding trees, and a timber-clad school with a wavy roof that meanders through a woodland plot.

Photography is by Hagen Stier

The post Kraus Schoenberg’s Hamburg nursery opens up to its forested site on all sides appeared first on Dezeen.