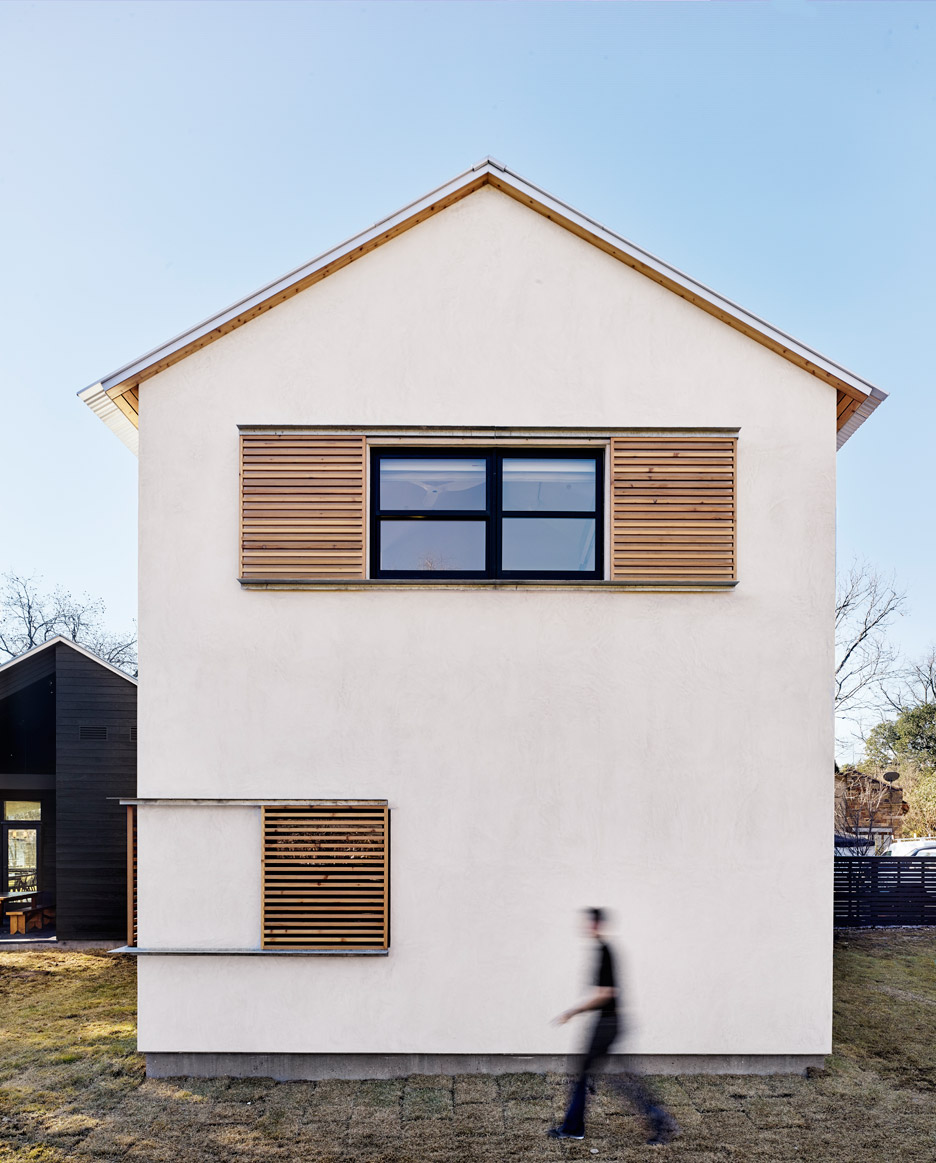 Aamodt Plumb Architects divided this prefabricated house in Texas into two wings to avoid felling a group of trees, covering one half in black-charred timber and the other in bright white stucco.

Aamodt Plumb Architects – which has offices in both Texas and Massachusetts – divided the house up into two wings: a two-storey block for sleeping and a single-storey block for dining, entertainment and recreation.

By doing this, the firm was able to avoid cutting down a group of mature trees on the site.

“This house sits between a set of tall live oak trees, which add to a sense of privacy and connection to nature,” said the architects in a project text.

“Spaces blend with one another and views outside and to the lake beyond bring nature into the house.”

The two wings are each clad in a different material. One is clad in white stucco, while the other has walls of charred cedar, giving the house a monochrome exterior.

The design team used the traditional Japanese technique of burning – known as Shou-Sugi-Ban – to burn the surface of the wood panels. These dark areas are contrasted by a light-coloured pitched roof.

“The black finish of the charred cedar is offset by a lightweight white steel roof that efficiently reflects the rays of the Texas sun away from the house, keeping it cool during the summer months,” said the firm.

Aamodt Plumb was commissioned to design the home for a young family, and was given only 12 months to complete the project.

“Twelve months made us realise that we had to think very differently about how to do this project,” said firm co-founder Mette Aamodt. “What we did was to redesign the process of building a house.”

The architects worked with a high-tech sustainable timber company to fabricate parts of the home in a factory. Meanwhile, a construction crew completed the site preparation and foundation work.

“This significantly reduced the amount of time to construct the building envelope,” explained the firm. “The factory fabrication also meant that the envelope of the house fit together so well that the house reaches passive energy standards.”

To further accelerate the project, the firm took an unusual approach when it came to the home’s interior: it minimised the commingling and integration of elements.

“Cabinetry was not built into walls but instead is floated on top of floors and in front of walls,” explained the firm. “Mechanical equipment, usually squirrelled away between walls or rooms, was given its own level between the floors and below the roof.”

The bedroom block accommodates five bedrooms – two on the ground floor and three above. Its also integrates a parking garage.

The opposite wing is largely taken up by a family room with living, dining and kitchen areas. There is also a separate dining space, a study and a television room.

Other family homes recently completed in the US include an Aspen dwelling by Will Bruder Architects, an updated bungalow in LA by Martin Fenlon, and a home in Princeton, New Jersey, by Levenbetts.

Photography is by Casey Dunn.

The post Lakefront Austin home by Aamodt Plumb Architects is a building of two halves appeared first on Dezeen.