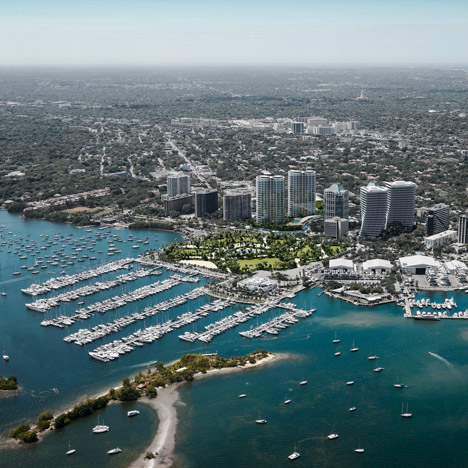 Feature: international architects are leading Miami‘s transforming from a retirement resort into a major cultural destination, according to architects and developers working in the city (+ slideshow).

An influx of money from South America coupled with the impact of the Art Basel art fair is driving the change, with a roster of global architects including Sou Fujimoto, Bjarke Ingels and OMA working on prestige cultural and residential projects in the south Florida city.

“We think Miami is the capital of Latin America at the moment,” said Shohei Shigematsu, a partner at OMA’s New York office. “It’s a gateway for Latin America to come into the United States.”

Shigematsu, who is working on a trio of residential towers at Coconut Grove in the city, spoke to Dezeen earlier this month about the forces that are helping to transform the Miami skyline.

Miami’s proximity to, and close cultural links with, Latin America are key reasons for the change, Shigematsu said, with investors from the southern half of the continent seeing the city as a safer haven for their money than their own countries. “I think that money contributed to Miami’s growth,” he said.

In addition, the annual Art Basel fair – which takes place at Miami Beach next week – has provided the city a cultural gravitas that has given local entrepreneurs the confidence to invest in avant-garde architecture.

“I think [Miami] has a growing cultural importance, largely thanks to Art Basel,” said Shigematsu, whose firm last year won a competition to rebuild the Miami Beach Convention Center that houses the fair. OMA has also been appointed to design a cluster of buildings at the Faena Miami Beach development, which will also feature a residential tower by Foster & Partners.

Architect Jacques Herzog of Herzog & de Meuron agreed. “The Art Basel fair was decisive to make that transition from a beach city to more than a beach city,” he told Dezeen. “When Art Basel came here [in 2002] this change started and has really transformed the city compared to what it was earlier.”

Miami’s new construction boom is striking, given the spectacular crash of the city’s real estate market only a few years ago. Developers threw up 245 condominium towers in Miami and Miami Beach between 2003 and 2010, with many of them left unfinished when the financial crisis hit and the money ran out.

Now the speculative market is booming again, with around 250 new condo towers in the pipeline according to cranespotters.com. Yet amongst these generic towers are a number of more innovative developments by the likes of OMA, Herzog & de Meuron and Zaha Hadid, which are helping make the city – with a population of under 500,000 and the 42nd largest in the USA – North America’s architecture hotspot.

Activity has spread from the Brickell neighbourhood of downtown Miami and the South Beach quarter of Miami Beach into formerly unfashionable areas such as Sunny Isles in the north and Coconut Grove (where Bjarke Ingels has designed a pair of twisting condo towers) in the south.

“Prior to the crash, there were just shells being put up and sold as real estate without any differentiation,” said Nasir Kassamali, CEO of Miami design retailer Luminaire. This time around, leading architects “are being asked by developers who now need new marketing tools.”

Kassamali agreed that South American money was helping to fuel the boom. “Miami was always the gateway between north and south [America],” he said. “There is a flight of capital out of South America. Instead of keeping things in the bank where you get one or two percent, they’re investing it in real estate [in Miami].”

It remains to be seen whether the flagship projects will actually be built as their architects intended, Kassamali said. “Zaha [Hadid] and I were talking about how important it is that she does the interiors of her projects and not some interior designer, because you need to have the envelope and the inside communicate,” he said.

“Otherwise you’re looking at a beautiful building and a horrible inside. So whether these developers follow and push the design envelope so that at the end it’s a true masterpiece that stands the test of time – that’s my worry.”

There is also the risk that the arrival of planeloads of (mostly European) starchitects will turn Miami into a clone of every other major city in the world, with a rash of generic, climate-controlled real estate propositions dressed up in “iconic” designer clothing.

However, Miami’s balmy subtropical climate, its Latin swagger and its areas with walkable, European-style grids are causing architects to rethink their standard approaches and explore more contextual solutions.

“Miami was [originally] laid out as a pedestrian city,” said Miami architect Terry Riley. “[But] it lost a lot of that common-sense architecture with air conditioning and underground garages where you go directly from your car into the building. A lot of people in Miami lived this air-conditioned life 12 months a year.”

“Now I think the attitude is changing,” he added. “You see that reflected in all the outdoor cafes and things like bike riding. The whole idea that you can live downtown now, shop downtown and have restaurants downtown is something completely new.”

Miami’s new mood is reflected in the emerging architecture of Foster & Partners’ condo tower at Faena Miami Beach, which features deep, wraparound covered terraces that provide shaded outdoor living spaces the architects have dubbed “aleros” after the Spanish term for a projecting eave.

Studio Gang‘s proposed residential tower in the Miami Design District also features deep balconies called “Florida rooms,” which the architects describe as “shaded, open-air rooms [that] provide both a thermal buffer for the interior and an outdoor space for relaxing and entertaining.”

Herzog & de Meuron, meanwhile, have used their Miami projects to explore new ways of responding to the Florida climate. Their Pérez Art Museum Miami and their 1111 Lincoln Road parking garage are both highly permeable structures that point the way to “a vernacular for Miami,” according to Herzog.

“These buildings are a possibility to escape the north American hermetic style of buildings where everything is controlled artificially with air conditioning,” Herzog said.

Besides the profusion of individual apartment buildings and grand cultural projects – such as the Pérez Art Museum Miami and the Miami Beach Convention Center – Miami is home to a growing number of developer-led private districts with high architectural and cultural aspirations.

Faena Miami Beach – headed by Argentinian hotelier and property developer Alan Faena – will feature a mixture of arts buildings, retail and apartments, plus a refurbishment of the legendary Saxony Hotel.

Ironside, a rundown historic district on Miami’s Upper Eastside, is being rejuvenated by developer Ofer Mizrahi, who has appointed Ron Arad to design spaces for creative businesses and apartments.

But the original architect-friendly Miami developer is Craig Robins, who cut his teeth revitalising Art Deco buildings on South Beach, in the process transforming the area’s fortunes and creating a template for design-led regeneration in the city.

“It was very rundown,” Robins recalls of the Art Deco district in the eighties, when he began acquiring properties there. “It had become a retirement village for an ageing population that was dying off. There were also areas that had become difficult slums. There was a crack epidemic in the US, all of which contributed to the neighbourhood spiralling downward.”

“There were a lot of people who thought the buildings should be torn down,” he added. “There was a group of us who not only thought they should be preserved but that they could become this incredible legacy that Miami could offer to the world.”

To make a success of the district, Robins adopted a more European-flavoured approach to city-making, focusing on creating boutique hotels and art galleries rather than wooing generic high-street brands.

“It was a big contrast to how things were done in the States,” Robins said. “South Beach is much more European. The structures are smaller. The neighbourhood is pedestrian-friendly.”

Robins long ago sold up his South Beach properties and over the past few years has been transforming his latest venture, a former decorating and furniture supplies quarter that he has rebranded as the Miami Design District, into a highbrow retail and restaurant destination.

“I felt that things were becoming so commercialised in South Beach that Miami needed a creative laboratory, an important place where interesting things could happen and where the definition of what could happen was not so rigid,” Robins said.

“This neighbourhood should really take a longer-term approach and continue with that idea of the creative laboratory. We should invest in culture, not necessarily profit and business, to continue to build the brand.”

Accordingly Robins – who is also co-founder of the Design Miami collectors’ fair, which runs concurrently with Art Basel next week – is gradually appointing suitably serious architects to add buildings to the district. So far he has appointed Sou Fujimoto to design a retail building, invited Studio Gang to build the aforementioned apartment block and commissioned a replica of Buckminster Fuller’s unfinished Fly’s Eye Dome to sit in front of Fujimoto’s building.

American architects ArandaLasch are also working on a building in the district, which already contains smaller, permanent installations by architects and designers including Zaha Hadid, Marc Newson and Konstantin Grcic.

“I’m not saying that Miami never had a culture, but it is increasing thanks to local entrepreneurs,” Shigematsu concludes. “So the art and architecture somehow became an equation for further branding or further expression of interest in the city.

Design Miami runs from 3-7 December and Art Basel runs from 4-7 December. All our coverage will be published here.