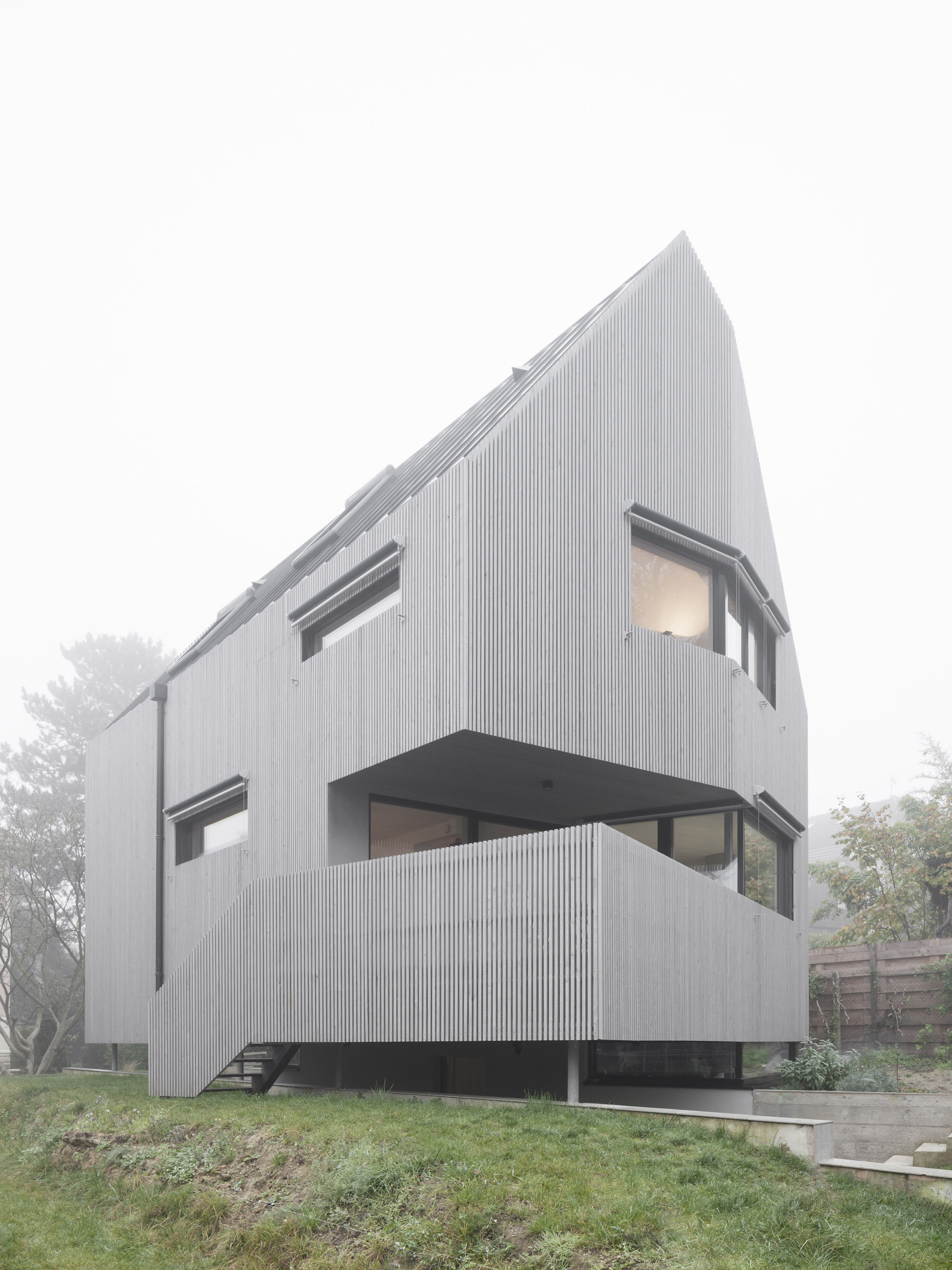 Lofty interiors and a folded black steel staircase feature behind the larch-clad walls of this gabled house, designed by Karawitz and situated outside Paris.

The architects created the 145-square-metre Marly House, which is clad entirely in grey larch wood, for a family in Marly-le-Roi, in the western suburbs of Paris.

Aiming to bring a “feeling of urbanity” to the small community, Karawitz placed the gabled residence much closer to the street than its neighbours, with a perforated steel fence allowing passers-by glimpses of the garden.

The residence is elevated above the ground on stilts, while the street-facing wall is folded down the middle, creating a terrace that is cantilevered toward the street.

“Its design reinvents the codes of the French house model, including the famous gable roof, but it renews its relation to its neighbourhood too,” said the architects.

“In a street where high hedges traditionally isolate each pavilion, this house opens wide on the street to create a new feeling of urbanity in this residential area,” they continued.

Karawitz built the house with a prefabricated structure of cross-laminated timber (CLT) – a type of engineered wood consisting of layers of laminated timber sections, offering a more sustainable alternative to concrete and steel.

The residence has also achieved a Passivhaus certification, which is given to buildings that consume minimal energy. The fireplace is solely responsible for the heating of the house.

Steps lead down from the street level to a gap carved underneath the house to create a basement entrance level, where stacks of wood are stored. There is also a garage at this level.

Inside the residence, the white-washed wooden walls and ceilings are paired with simple materials like black steel and exposed concrete.

“Throughout the house raw materials are left exposed, creating a sense of authenticity for this solid-wood, CLT-prefabricated house,” said the architects.

“The house really does seem to have achieved the lofty dream it was targeting with such clarity,” the continued.

On the ground floor, the kitchen is nestled into the corner on the street-facing side of the house, while the lounge area is placed at the rear towards the garden.

A large dining room, raised a step up from the living room, features glass doors that open onto the terrace.

“It blurs the boundaries between private and public to the benefit of user-friendly rooms that also open onto the outside,” the architects explained.

The main staircase, placed in between the kitchen and living room, is folded from a single piece of prefabricated steel. The landing on the floor above is used as an open play area for the children.

A ladder leads from here to one of the children’s bedrooms in the eaves of the building.

The master bedroom faces the street, so the architects placed the windows high in order to maintain the privacy of the inhabitants.

Karawitz is led by architects Milena Karanesheva and Mischa Witzmann. The firm has also completed a Parisian apartment block with boxy balconies and spiral staircase.

Photography is by Schnepp Renou.