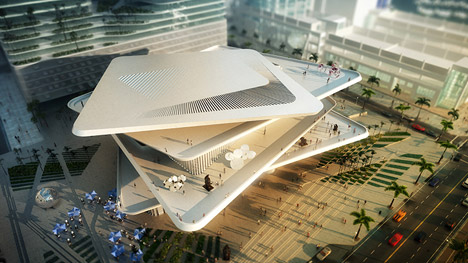 News: Mexican architect Fernando Romero has unveiled his design for a South American art museum in Miami – the so-called capital of Latin America – during this week’s Art Basel and Design Miami events (+ movie).

Following months of speculation Fernando Romero, principal architect at FR-EE, confirmed he will be designing the Latin American Art Museum at Miami Beach, which is expected to house “one of the most ambitious collections of Latin American art” in the world.

The four-storey building is envisioned as a cascade of overlapping terraces, offering both climate-controlled galleries and a series of “sculptural gardens” intended to encourage passersby to venture inside.

It will be located on Biscayne Boulevard and form part of a housing complex. According to FR-EE, the museum will also function as the main access for residents of the 111 proposed apartments, which will be built in a later phase.
“The museum is going to be a sort of meeting point for the residents and their visits,” said the studio.

The ground floor of the building will be dedicated to showcasing young and emerging artists, offering a new platform for the promotion of contemporary Latin American art.
Temporary exhibitions will be located on the next level up and the second floor will present the museum’s permanent collection. The third floor will contain a restaurant, while a shop and cafe will be situated on the ground floor.

Staircases both inside and outside the 8,000-square-metre building will offer connections between galleries and terraces. The architect hopes the structure will “emphasise the benefits of the tropical architecture” through the addition of natural ventilation and foliage.
Miami-based art collector Gary Nader is behind the project, which is expected to open in 2016. The first year of programming will include a retrospective of Colombian sculptor Fernando Botero and a major exhibition of Brazilian art.

The museum is the latest in a series of ambitious architectural projects that are transforming the US city into a major cultural destination. Projects by Sou Fujimoto, Bjarke Ingels and OMA are all underway, but Romero is one of the first well-known South American architects to get on board.
Brazilian architect Isay Weinfeld is also expected to unveil a design for the renovation of the popular Shore Club in the coming months.
The post Latin American Art Museum by Fernando Romero revealed for downtown Miami appeared first on Dezeen.