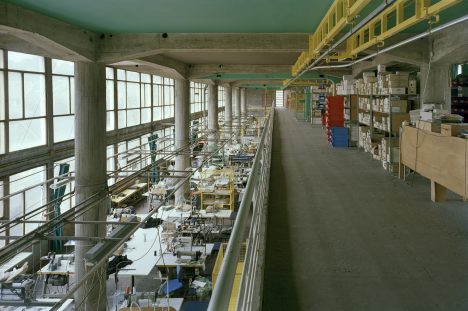 World Heritage Corb: French-Swiss architect Le Corbusier‘s humble hosiery factory in France was one of the first buildings designed with proportions based on his innovative Modulor system, and has recently been added to UNESCO’s World Heritage List (+ slideshow).

Located in the town of Saint-Dié, France, near the German border, the factory has been listed as a historic monument since 1988.

After a fire almost entirely destroyed the Claude et Duval family-owned factory in 1944, the owner, Jean-Claude Duval, sought out the services of his friend Le Corbusier to rebuild a new factory.

Progress was slowed by the fallout from the second world war, and the building only completed in 1951.

When designing the building, Le Corbusier experimented with his new proportion system that he called the Modulor.

The anthropomorphic scale uses dimensions based on the height of a man with his raised arm. It was created to reconcile architecture with human proportions, as well as bridge the metric and imperial system.

Le Corbusier used the Modulor to dictate column grids, ceiling heights and sizes of rooms at the hosiery factory, and many subsequent projects.

Workshops are situated on the building’s double-height main floors, while mezzanine levels encompass administrative offices and other functions.

On the roof, a terrace with plantings allows personnel to enjoy the outdoors without leaving the building.

While Le Corbusier based many of his design on factory-inspired ideas of efficiency and rationality, he mostly applied these principles to housing schemes.

For example, he completed workers housing for employees of a sugar factory near Bordeaux, and a model housing unit in Stuttgart for the 1927 Werkbund. These projects were also among the 17 of his buildings added to UNESCO’s World Heritage List.

Photography is by Olivier Martin-Gambier.