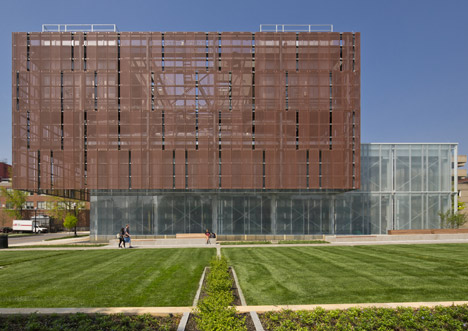 Boston-based Leers Weinzapfel Associates has completed a new water-cooling facility at Ohio State University that is sheathed in a copper-coloured aluminium screen (+slideshow).

Encompassing 30,000 square feet (2,800 square metre), the East Regional Chilled Water Plant sits on a prominent site between the historic Ohio State University (OSU) campus and the city of Columbus, Ohio. The building not only provides critical services, but also serves as an aesthetically pleasing gateway to the campus, said the firm.

“We believe that performance and beauty can co-exist in campus infrastructure,” said firm principal Jane Weinzapfel in a statement.

“A building that serves utilitarian functions can not only meet rigorous functional requirements but can also, through artistic yet synergistic design, contribute to the architectural context of its environment,” she added. “OSU’s East Regional Chilled Water Plan is our firm’s latest example of this approach.”

The OSU plant houses a centralized system that provides chilled water to numerous campus buildings for use in their air-conditioning systems. After the water is used, it is sent back to the plant to be re-cooled and redistributed.

The building comprises two overlapping volumes. The boxy upper volume, which is open to the sky and contains the cooling towers, is sheathed in a screen made of copper-hued aluminium.

The veil features two perforation densities, along with narrow open slots, that together meet ventilation requirements for the cooling equipment.

“Its perforated, copper-coloured aluminium enclosure serves as a new interpretation of the brick used prolifically on this and many US college campuses, adding aesthetic variety to its built surroundings,” said the firm.

“The result is an elegant approach that fits well with the building’s urban site and the surrounding context of older brick buildings.”

The lower, two-story volume is rectilinear in form and covered in glass. “Veiled and diaphanous on the exterior, it provides semi-transparent views from the interior looking out,” said the firm.

Completed in June, the facility houses a densely packed layout of equipment, with up to six chillers and cooling towers. To minimise the building’s mass, the firm placed pumping equipment in a basement.

The plant glows at night, which helps illuminate surrounding pedestrian zones and “continues the dialogue between the building’s forms and their contrasting materials,” said the firm.

“The glowing crystalline lower volume is lit from the inside, while the glittering metallic volume above is illuminated with a halo of projecting lights at its upper edge,” it added.

GBBN was associated architect for the $38 million (£24 million) project. The OSU facility marks the third university chiller plant by Leers Weinzapfel, with the others at Princeton University and the University of Pennsylvania.

Leers Weinzapfel, a multidisciplinary practice, was founded in 1982 by Andrea Leers and Jane Weinzapfel. In 2007, it was the first women-owned studio to receive the prestigious Firm Award from the American Institute of Architects — the highest honour bestowed upon a US architectural practice.

Recent infrastructure projects by other firms include the Amager Bakke Waste-to-Energy Plant in Copenhagen by Bjarke Ingels Group, a waste incinerator and power plant in the Danish city of Roskilde by Erick van Egeraat, and a water treatment facility in Portland, Oregon, by Skylab Architecture.

Photography is by Brad Feinknopf