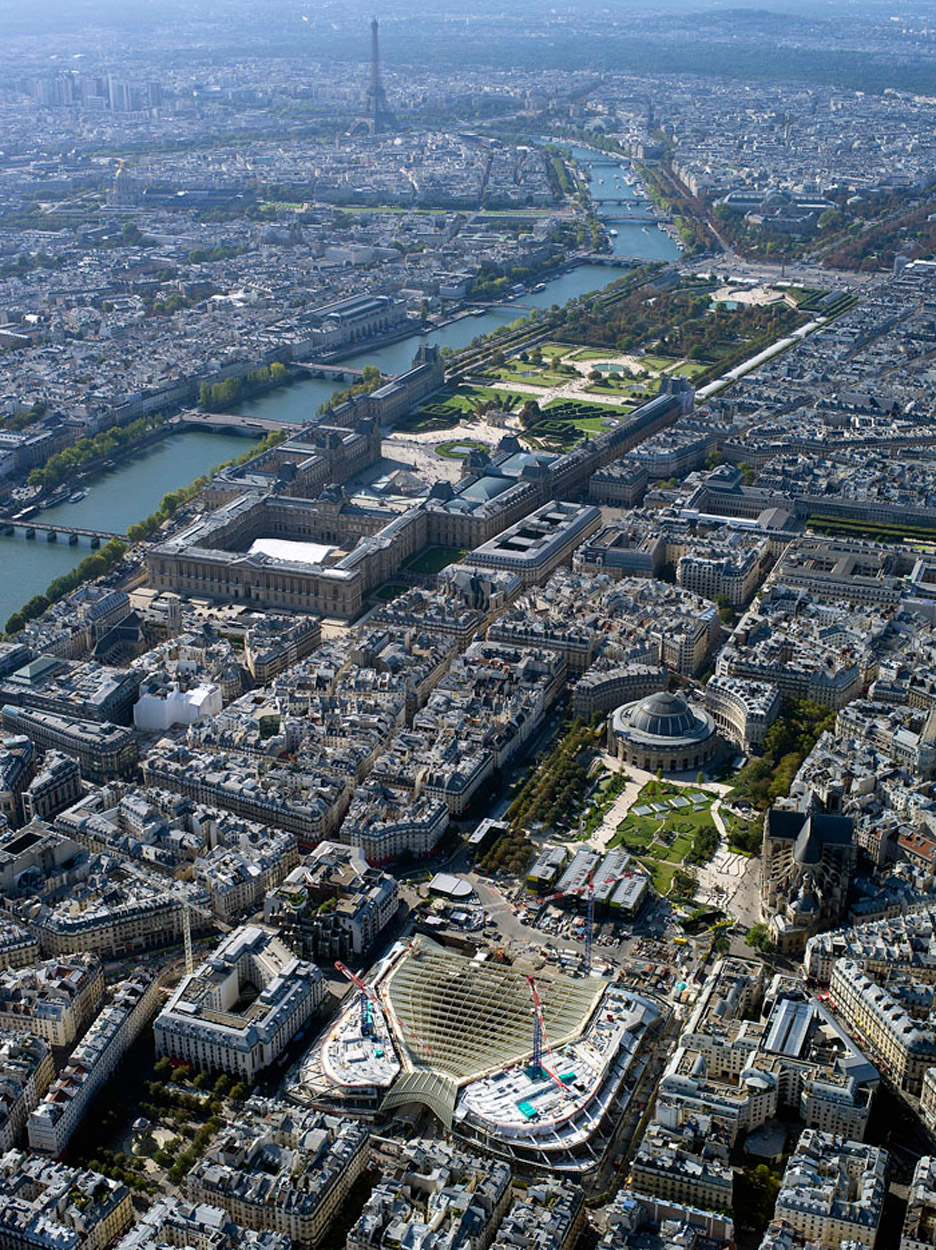 A long-awaited cultural centre designed by architects Patrick Berger and Jacques Anziutti is nearing completion on the site of Les Halles – a historic Parisian marketplace demolished in the 1970s.

The centre is scheduled to open in April, eight years after the City of Paris launched a competition for a complete reconstruction of the existing shopping centre Forum des Halles.

Berger and Anziutti’s design – known as the Canopy – will be crowned by a giant glass roof spanning an area of 270,000 square feet.

This enormous roof will comprise around 18,000 pieces of glass, which will be supported by 7,000 tonnes of steel.

“The dynamic elements of the site guided the idea of the Canopy,” said the architects. “Its curvilinear and organic forms are the result of observations and analyses of the natural and human- made forces that act on an urban environment.”

“Under the vast shelter of the Canopy, some 18,000 glass shells diffuse a soft light whatever the weather forecast, so that the interior temperatures are maintained without undue energy consumption,” they added.

The site comprises a “true urban underground zone” spread over five floors. It extends up to 24-metres-high, and measures 500 metres lengthwise up towards the Place du Châtelet.

The multileveled centre is organised around two wings – each of which are used to house 14,000 square metres of cultural facilities. While a music conservatory is located on the south side, a media centre, a cultural centre and a “home for amateur dance music and theatre practitioners” are situated to the north.

The main entrance has been relocated to the edge of a vast public garden, which is designed as a meadow dotted with flower beds and plants.

“The gardens are framed on either side by wooded areas and equipped with playgrounds, benches, petanque courts, chess tables and much more,” said the team. “It will be more inviting, open and accessible to the public and will have more greenery than before.”

Les Halles food market – referred to as “the belly of Paris” by novelist Émile Zola – dates back as far as the 12th century. The famous glass and iron buildings were designed by architect Victor Baltard in the 1850s, but demolished during the 1970s, leaving a hole for several years until the Forum shopping centre was built over the Châtelet – Les Halles station in 1979.

Although Scottish newspaper The National reported that the new building has been met with much criticism from the Parisian public, the reconstructed Forum des Halles is expected to welcome 37 million visitors each year.

Paris has been the site for a number of innovative projects and proposals in the last few years. The most high-profile new additions to the city include Frank Gehry’s Fondation Louis Vuitton and Jean Nouvel’s Philharmonie de Paris.

Other new designs include a multicoloured basketball court, Herzog & de Meuron’s 180-metre-high Tour Triangle and a conceptual capsule hotel on stilts along the Seine.