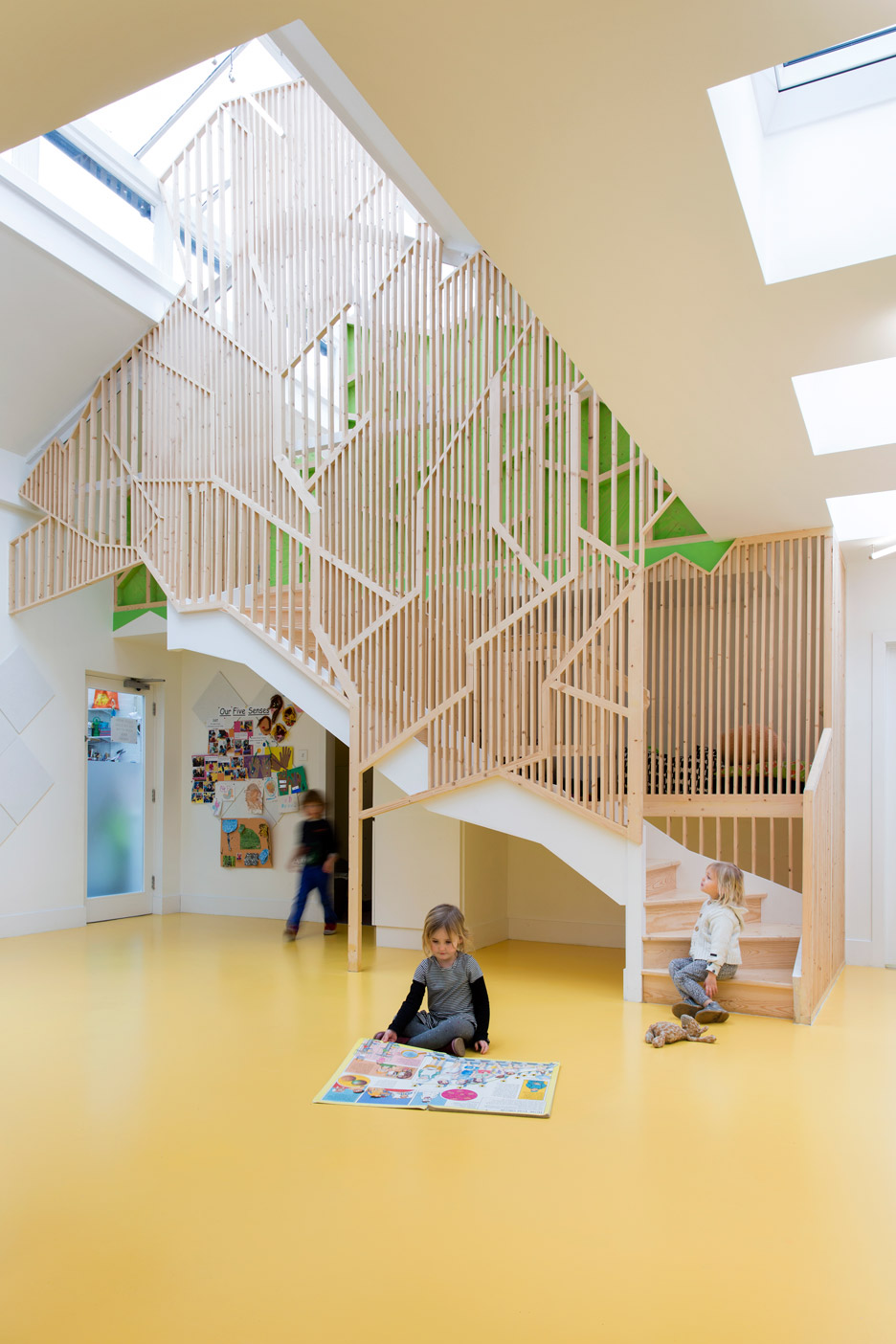 London-based Lipton Plant was brought on board to extend and refurbish The Bath House Children’s Community Centre in Hackney – a building which served as a public washing baths from the 1930s up until the 1980s.

The design revolves around a wooden tree-like structure that connects the open-plan ground floor with an elevated platform for quiet play, reading and sleeping.

This element is modelled on the treehouse home of the Swiss Family Robinson – the fictional shipwrecked family who feature in the 1960 Walt Disney film, which was an adaption of an early 19th century novel by Johann David Wyss.

Architects Ifat Finkelman and Deborah Warschawski similarly added a treehouse structure to a children’s play area at the Israel Museum in Jerusalem.

“The concept for the tree, which envelopes the stair and with its many levels and dens on route to the top, was inspired by the tree house in Swiss Family Robinson,” said studio co-founder Ed Lipton.

“The tree both represents and encourages protection, adventure, creativity and growth; physically and emotionally,” Lipton added. “The new users – children, staff and parents – were overwhelmed once the new space was revealed to them.”

To form the treehouse element of the staircase, the architects used a series of slatted wooden planks overlaid with branch-like pieces.

As well as creating a tree-like appearance, the pieces of wood also form a series of balustrades that aid small children when walking up the staircase.

Large glass doors allow children access to an outdoor area which they have named The Sunshine Room.

Outside, crisp white brick contrasts with bright primary colours, including a sunny yellow rubber floor that continues through to the interior.

Whilst refurbishing the building, the architects had to work in accordance with nursery requirements – such as maintaining the temperature at 21 degrees Celsius.

To ensure this, all original doors were replaced with timber and aluminium composite double glazed doors from Denmark to provide better thermal efficiency, and – wherever possible – low-energy light fittings were installed.

Lipton Plant is a London-based studio founded in 2002 by architects Edward Lipton and Jonathan Plant.

The studio has completed a number of projects in the British capital, including a pale brick addition to a mid-century home in Stoke Newington and a two-storey structure made of blue brick with a glazed roof strong enough to walk on. Most recently, it added a nanny flat underneath a property in Barnsbury.

Photography is by David Vintiner.