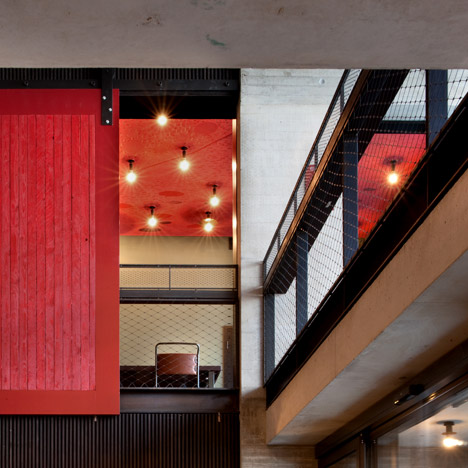 News: Haworth Tompkins’ new home for the Everyman Theatre in Liverpool, featuring a curved auditorium built from 25,000 reclaimed bricks, is the 2014 winner of the RIBA Stirling Prize for the biggest contribution to British architecture this year.

The project by London studio Haworth Tompkins involved designing a new home for the popular Liverpool theatre, which had been previously been housed in a 19th-century chapel, creating a 400-seat auditorium and a generous foyer.

The walls of the old building had to be carefully dismantled so that the bricks could be reused within the new theatre, and a new facade was created from sunshades etched with the portraits of some of the English city’s residents.

The judges described the theatre as “hugely welcoming” and “exceptionally sustainable”, and praised its “clever use of materials with interlocking spaces and brilliant lighting”.

“As Howarth Tompkins’ first completely new theatre, it is a culmination of their many explorations into the theatre of the 21st century. It is groundbreaking as a truly public building, which was at the heart of the client’s philosophy and ethos. In summary, an extraordinary contribution to both theatre and the city,” they said.

The Stirling Prize was awarded this evening in a ceremony at the Royal Institute of British Architects in London.

Speaking this evening, Haworth Tompkins co-founder Steve Tompkins commented: “Winning the RIBA Stirling Prize is an enormous honour for our project team and our clients, the reward for an intensive collaboration over almost a decade, during which we have grown to love the Everyman and the great city that it serves.”

“It is also an important endorsement of our studio’s ethos and an encouragement to carry on working the way we do, despite the pressures all of us are under to speed up and dumb down. We couldn’t be more delighted.”

This is the second time the practice has been nominated for the prize, which is awarded annually by the Royal Institute of British Architects to a building designed by a UK-registered architect. In 2007, it received a nomination for the Young Vic theatre in London, but lost out to David Chipperfield’s Museum of Modern Literature in Germany.

Photography is by Philip Vile.