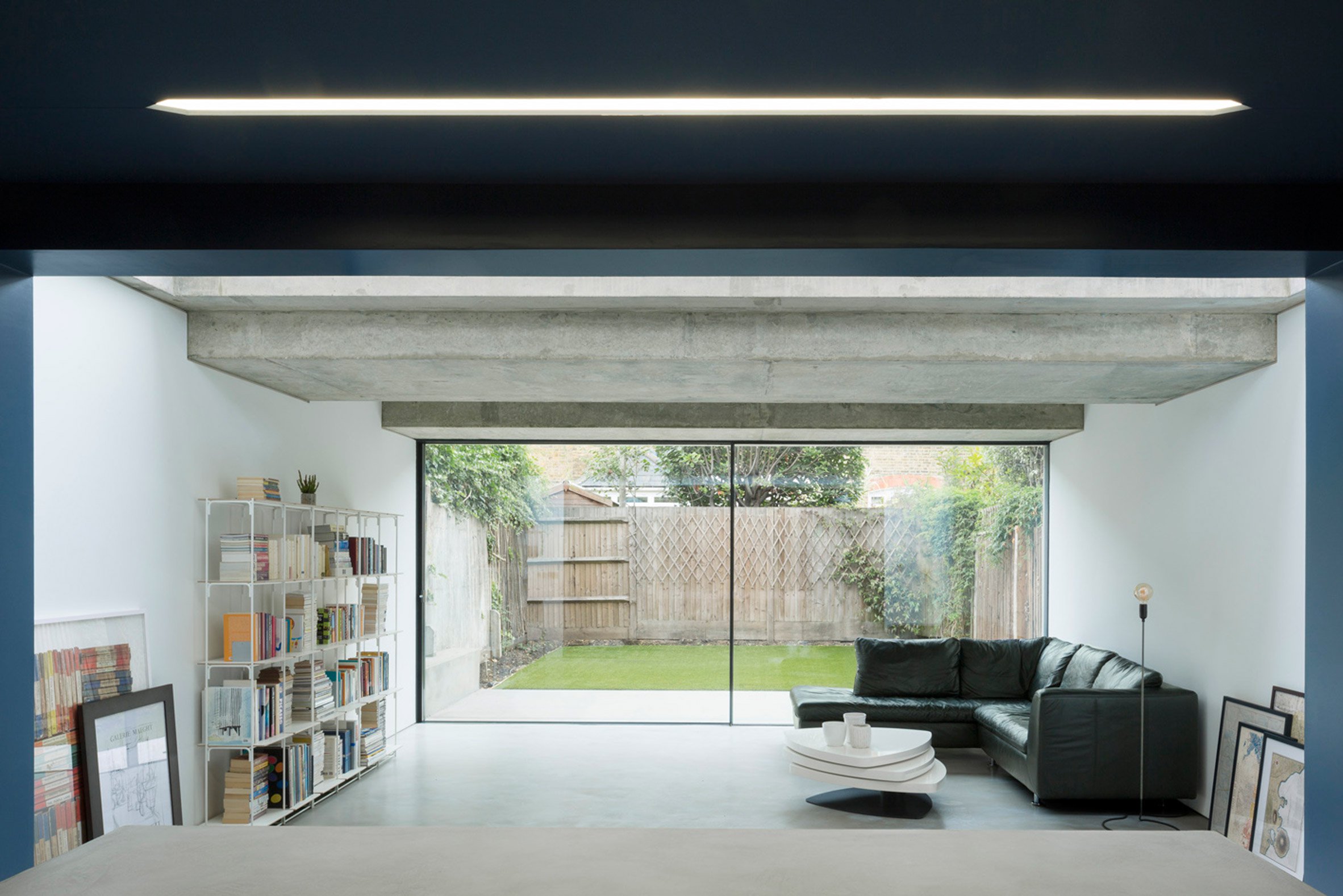 Peaks and troughs accommodate planting on the roof of this concrete extension to a south London house by Bureau de Change Architects, which has a blue and white interior.

Bureau de Change Architects, which was co-founded by Katerina Dionysopoulou and Billy Mavropoulos, extended house in Clapham to create a lounge and kitchen with sliding glass doors that open to the garden.

The architects named the project Slab House after the appearance of the thick concrete roof. Inside, the exposed concrete ceiling of the living area features pronounced beams that form sunken roof planters above.

“We wanted to create a volume whose form would be meaningful both inside and out,” said Mavropoulos.

“Inside, the motion of the roof slab breaks up the minimal surfaces of the living area,” he continued. “Outside, it creates appealing views through hollows and humps, which bring nature and concrete into immediate proximity.”

A skylight stretches the full width of the room where the living area adjoins the kitchen, which is set back within the footprint of the original house.

This strip provides the kitchen, which would otherwise be overcast by its position, with natural light as well as offers views into the space from the roof.

Inside, Dionysopoulou and Mavropoulos wanted to create different atmospheres for the kitchen and the living room.

A change from white to blue marks the transition from the lounge to the kitchen. All surfaces of the kitchen space, including its resin floor are blue.

A concrete floor in the white-painted living area stretches to meet the threshold of the kitchen, where it forms the kitchen island and breakfast bar.

“The concrete appears to force its way into the kitchen’s footprint, creating a pathway around which the resin floor wraps,” said the architects.

Blue storage cupboards line the walls of the kitchen, concealing ample storage on one side and a cloakroom on the other.

Geometric cutaways form door handles along the edges of the cabinets. The seams between the cabinets extend onto the ceiling, where further angular insets host recessed lighting.

Delicate furniture, including a La Bibliotheque Fil Bookcase and a Rotor Occasional Table by Ligne Roset, as well as a Design House Stockholm chord lamp finish the living area, aiming to create a lightweight contrast to the heavy room.

Bureau de Change Architects has previously created an extension with a pleated ceiling and merged a pair of terraced houses to create a new residence.