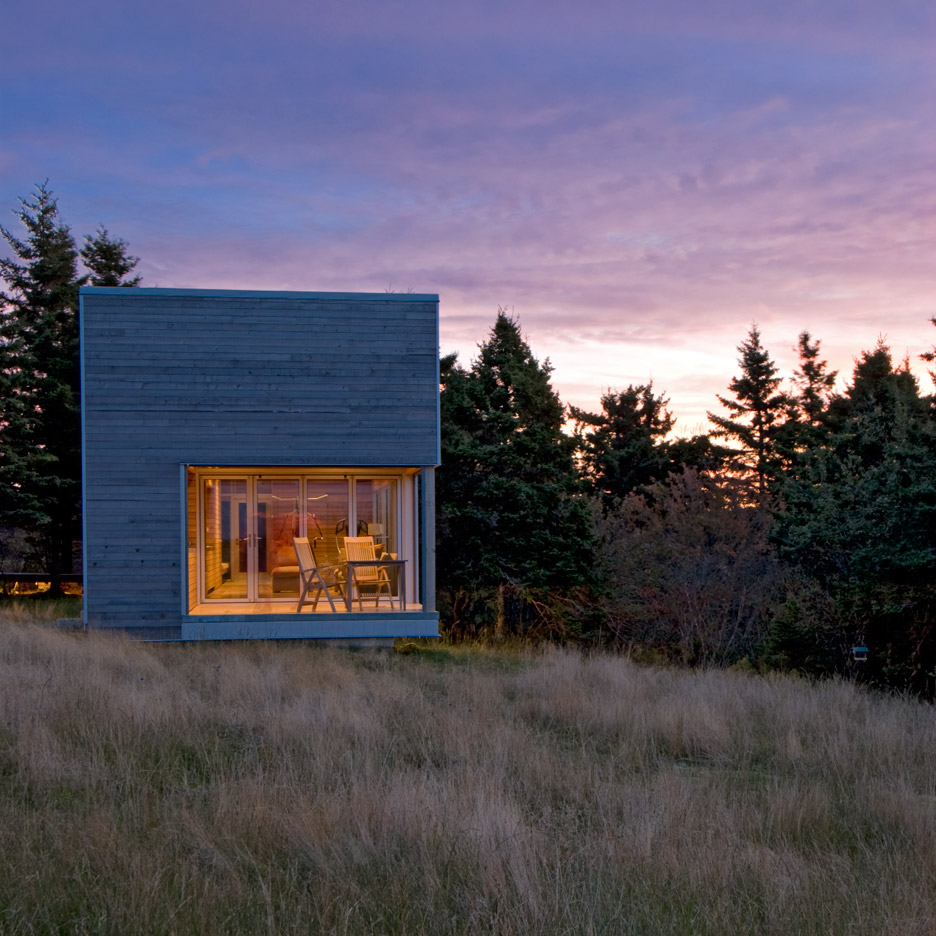 A wooden boardwalk leads inside this timber-clad gym and spa building, designed by MacKay-Lyons Sweetapple Architects to accompany a residence on Nova Scotia’s Atlantic coast (+ slideshow).

MacKay-Lyons Sweetapple – whose founder Brian MacKay-Lyons won Canada’s most prestigious architecture award in 2015 – designed the small wooden building to accompany the two blocks that make up House 22, which the firm completed in 1998.

The single-storey block is cuboidal in form and is clad in cedar boards, mirroring the materiality of the existing house and guesthouse. But unlike these two blocks, which sit on the hilltop, the new building stands on the edge of a wood.

“The previous two pavilions are rustic hemlock boxes floating above two agrarian hilltops,” said the studio. “They are precisely aligned in both plan and section.”

“This new, third pavilion is sited and experienced very differently, below the others and tucked into the edge of the forest, facing a field, before the sea,” it added.

“[It] is conceived as a monolithic block of wood, carved to form interior spaces.”

The wooden boardwalk extends across an uneven terrain of mosses and boulders to provide access to the spa. It leads in via a glazed porch, conceived by the architects as a “bite” out of the facade.

Inside, a sauna and wet room are located on one side, while the other accommodates a toilet, a compact kitchen, a pullout daybed, and a storage area for a barbecue.

The large central space can be used for various functions – as a party venue, or as a workout space. It leads out onto a sheltered south-facing terrace.

Like the exterior, the interior spaces are framed by sawn channel-joint shiplap cedar. It was used for all of the built-in furniture, and also covers the ceiling.

The only other materials visible are concrete on the floor and glazed tiles in the bathroom.

“The Minimalist approach requires a high level of craftsmanship in order to achieve a calm, serene effect,” added the studio.

Brian MacKay-Lyons has built his reputation on projects like House 22, and has completed numerous residences that take advantage of a rural setting. He was awarded the 2015 Royal Architectural Institute of Canada Gold Medal for his “pure, dignified, poetic and beautiful” approach.

Other projects by his firm include a seaside holiday home perched on a row of narrow concrete fins and a house that extends over the edge of a rocky outcrop.