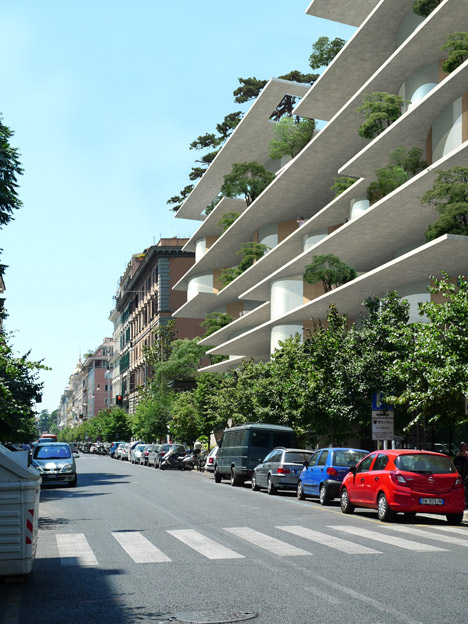 It will be the first built project in Europe by the Chinese firm, whose projects include the horseshoe-shaped Sheraton Huzhou hotel in China and the curvaceous Absolute Towers in Mississauga, Canada.

MAD won a competition in 2010 to overhaul the eight-storey building at 71 Via Boncompagni – a courtyard building attached to an early 20th century chapel – and it has taken four years to get the project approved by local planning authorities.

Rather than demolishing and replacing the original building, MAD plans to just remove its facades and strip it back to the structural framework so that transparent walls and open-plan interiors can be added.

“Contemporary living in a museum-like city like Rome is often hidden behind its historical facades,” said the studio in a statement.
“Through this adaptive rebuild project, this ‘open’ building will be able to return vitality and urban living to the traditional neighbourhood.”

A total of 145 apartments, ranging from studio flats to family homes, will be contained within the building.

Balconies and terraces will be added along the glazed outer walls, slotted into the gaps between the apartments and the old structural framework.
Trees will be dotted across them, and gaps in the floor plates will allow room for high branches.

“The full-height curved glass windows shift and protrude in a controlled choreography between the floor slabs,” added MAD.

Walls surrounding the courtyard will be re-clad with glass and metal-mesh curtains, offering views down to a new pond. Voids that rise up through the water will allow daylight to filter through to a subterranean car park below.

The project is scheduled to complete in 2017.

Yansong has recently presented a series of projects encapsulating his concept for “shan-shui city” – a style of architecture based on the landscapes depicted in traditional Chinese paintings.

“A shan-shui city is a modern city, a high density urban situation, but we pay more attention to the environment,” Yansong told Dezeen in an interview. “We bring waterfalls, we bring in a lot of trees and gardens. We treat architecture as a landscape.”