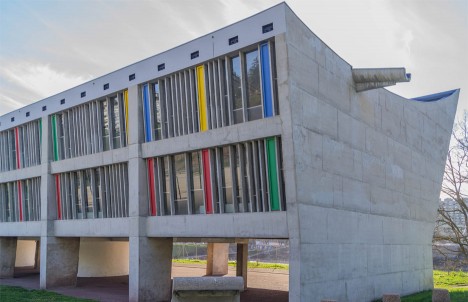 World Heritage Corb: next up in our series on the 17 Le Corbusier buildings that have just been added to UNESCO’s World Heritage list is the Maison de la Culture, a cultural centre in Firminy, France (+ slideshow).

Maison de la Culture is part of a larger complex of buildings by the Swiss-born French architect, called Firminy Vert, which was built on an artificial hill in a former stone quarry and completed in 1965.

Containing a music room, an auditorium, a theatre, an art room, a bar and a dance room amongst other facilities, the concrete building measures 112 meters by 14 meters and is punctuated by colourful openings.

The cultural centre’s angled facade resembles an athletics building, and it was originally intended to double as bleachers for the city’s stadium. A debate over funding eventually led to the two functions being separated.

The structure is composed of 16 sections organised over three levels with a detached roof, featuring an asymmetrical curve that rises 1.3 metres.

The 10 centimetre-thick concrete slabs that form the roof are supported by 132 cables connected to the peripheral support beams. Two spouts are located on either side of the building to aid drainage.

The roof is currently in need of refurbishment at an estimated cost of €8 million (£6.6 million).

Maison de la Culture is one of 17 buildings by Le Corbusier – who is widely considered one of the most important architects of the 20th century – to have been added to UNESCO‘s World Heritage List of internationally significant architectural sites.

The Marseille Unité d’Habitation housing – one of the world’s most iconic Brutalist designs – and the architect’s tiny seaside holiday cabin Cabanon on the Côte d’Azur in France are among the others added to the list.