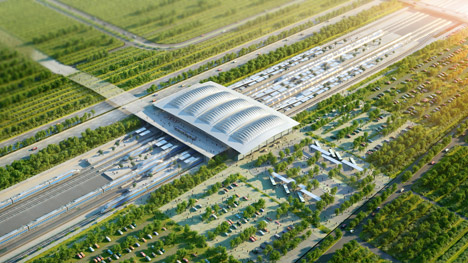 News: French architect Marc Mimram has been selected to create a new train station in Montpellier – a building that will bridge over the railway line and feature an intricate pleated roof (+ slideshow).

Marc Mimram‘s Paris-based architecture and engineering firm will create the 3,500-square-metre station for TGV, France’s high-speed rail network, in the Odysséum district that sits between the city centre and the airport.

It will create a fast link to the nearby city of Nîmes, and will also connect with the existing Perpignan-to-Barcelona line to reduce journey times between the Spanish city and Paris.

The building is conceived as a “garden station”, with a fibre-reinforced concrete roof shaped into five eight-metre-wide domes. Each of these domes will feature rows of pleats designed to throw dappled shadows across the station concourse.

According to the architect, the varying light and shadow will make travellers aware of the changing climate and seasons outside.

“We want to create a garden station, a station of the senses that delights travellers and allows them to engage with the beauty of their surroundings,” said Mimram, describing the setting as “beautiful”.

The architect, whose buildings include a recent addition to Ecole Nationale Supérieure d’Architecture, continued: “Our design addresses the emotions of meeting, waiting and departing and creates a bright and airy space that, even in the short time a person might spend in the station, will engage them with the nature of Montpellier.”

Fibre-reinforced concrete beams and slender steel columns will support the roof, with spans across the entire width of the bridge-like station.

The public concourse will be located on the first floor and passengers will descend to the lower level to board trains. A tram will serve the station from the city centre, arriving at a sheltered area in front of the station’s first-floor entrance.

Construction works will begin early next year, and the team will be responsible for the maintenance and operation of the station for a 15-year-period.