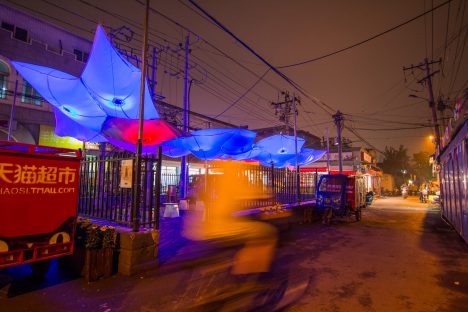 Beijing Design Week 2016: Max Gerthel Studio has created an events pavilion that inflates and deflates to mimic a breathing octopus – joining the ranks of design practices to have made inflatable pavilions (+ movie).

The Beijing-based studio created the structure to serve as an events pavilion for the Baitasi hutong area.

It transformed a gated square, usually overflowing with trash, into a playful space for residents in the neighbourhood.

The structure, named the Octopus Pavilion, will also host Beijing Design Week‘s Soft City programme. The project aims to engage the public in discussions about challenges in the city.

As a response to the theme of softness, the architects chose to create an inflatable canopy that is made up of a series of irregularly shaped white balloons tied together with string.

Each one is fitted with a motion and a sound sensor that detects movement below and causes them to repeatedly inflate and deflate. At night time, a series of LEDs also light up in red, purple and blue, turning the square into a dance floor.

“Using the analogy of an octopus, the pavilion highlights the characteristics of soft systems and intelligent skin,” said architect Max Gerthel.

“The pavilion is made of an array of pneumatic cells that can inflate and deflate as well as glow with coloured light in response to activity in the site.”

“They really glow quite beautifully at night,” said the architect.

“They change to a white light when they hear sound, so the locals and the kids especially have been having a lot of fun screaming at them and seeing how far they can make their voice felt in the thing.”

The Octopus Pavilion follows the trend for inflatable architecture, which has resulted in projects ranging from a mobile concert hall to a black PVC nightclub and a field of giant mushrooms.

The Soft City programme includes a roundtable discussion exploring aspects of soft design in the city as well as a series of workshops, performances and community events exploring new systems of knowledge and sharing.

Other projects on show include Casper Notenboom’s collection of bags that references the way that people in China transport large stacks of goods on their bikes and Thomas Schnur’s pieces of furniture adapted from common objects like traffic cones and metal barriers.

Video is by Amanda Schwarz.