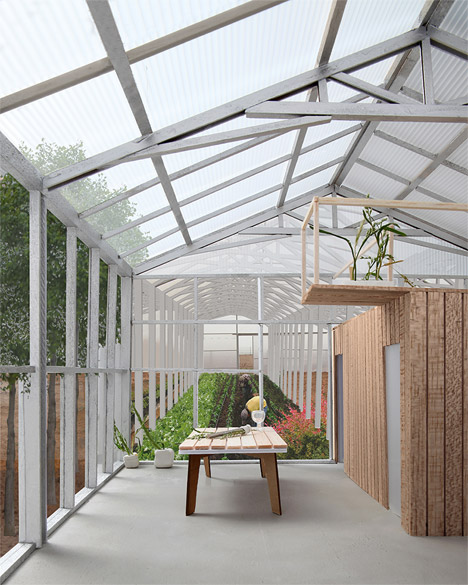 Maxime Dumoulin
The professors asked their students to respond to a competition brief for a series of apartment buildings, but to focus on a particular detail and viewpoint that could be represented in a single image of a 1:20 scale model.
Géraldine Luthi
“The idea was to make models for the purpose of photography,” Delvaux told Dezeen, “to use models to create presentation images that can replace 3D renders or sketches.”
Pierre Gréaume
The students were encouraged to consider appropriate materials that would help to achieve a realistic sense of scale within the model interiors. For example, some students produced miniature versions of bricks from plaster, while others opted for printed textures applied to the interior surfaces to represent tiles or concrete.
Germain Brunet
“We tried to make something that’s between reality and a model,” Delvaux explained. “The models are built for the purpose of the image so it’s like a theatre set where you see the image just from one point of view.”
Eleonor Ferragu
The illusion of reality is enhanced by Delvaux’s studio lighting, which emulates natural light. The students were also asked to select photographs, renders or sketches to use as background images, which were added by Delvaux during the post-production process.
Clementine Francois and Tom Pariente
Other details including furniture and miniature plants were also added to give the interiors the feeling of being genuinely occupied spaces.
Deyana Stareva
The photographs formed the main element of the students’ competition entry, alongside plans and elevations of the spaces.
Julie Pereira Acuna and Sylvain Thomas
One of the project’s aims was to develop a catalogue of images that can be used as a reference to illustrate the most successful materials for producing this type of realistic scale photography.
Rafael Gomis
Delvaux has produced similar images for established architectural offices and believes there are both pros and cons to this approach.
Jonathan Van Saet
“I think the main advantage is that viewers perceive the images as a bit more realistic and can project themselves into that space,” the photographer suggested.
Antoine Erimian
“However, sometimes it’s a problem for clients because it’s too real. There isn’t a lot of space left for imagination, which is more possible with renders.”
The post Maxime Delvaux’s realistic photos of student models offer an alternative to 3D renders appeared first on Dezeen.