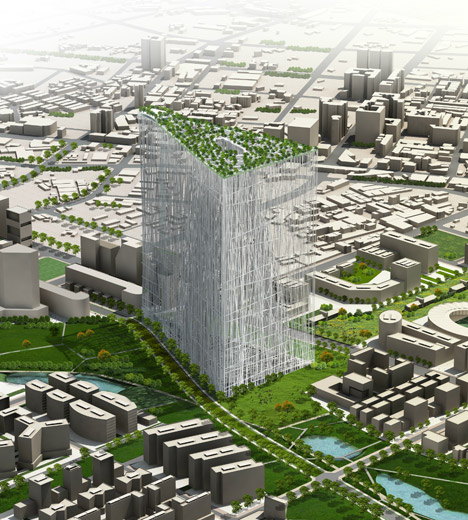 News: Taichung mayor Lin Chia-lung has temporarily halted development of Sou Fujimoto’s tree-inspired 300-metre tower for the city, which he says is “problematic” in terms of structure and safety.
Total costs are reported to have increased from NT$8 billion (£166 million) to NT$15 billion (£312 million) for the Taiwan Tower – conceived as Taichung’s answer to the Eiffel Tower. Lin has said he would rather pay the penalty for breaking the construction contract than spend that much.

Speaking at a city hall meeting earlier this week, the mayor stated that the current budget for the project “is not in line with the Greater Taichung Council’s resolution,” according to the Taipei Times.

Japanese architect Sou Fujimoto won a competition in 2011 to design the landmark, with a proposal that features an intricate steel form inspired by the Taiwanese Banyan tree and a rooftop garden overlooking the city.
The project was championed by former mayor Jason Hu, who wanted to create “a spot bright enough for the whole world to see”. He also believed it would become a large source of revenue for the city.

Li proposed appointing a team to review and possibly scrap the plans. He is reported to have said that the losses caused by “suspension and compensation payments” involved in halting the project could be as much as NT$300 million (£6 million).

Dezeen Book of Interviews: Sou Fujimoto features in our new book, which is on sale now

“Making a wrong decision is more horrible than corruption,” he said.

Construction has not yet begun on the site at the southern tip of Taichung Gateway Park – a trade park at the former Taichung Airport. The tower was originally scheduled for completion in 2017.
Sou Fujimoto could not be contacted for comment.
The post Mayor pulls plug on Sou Fujimoto’s Taiwan Tower over safety and cost concerns appeared first on Dezeen.