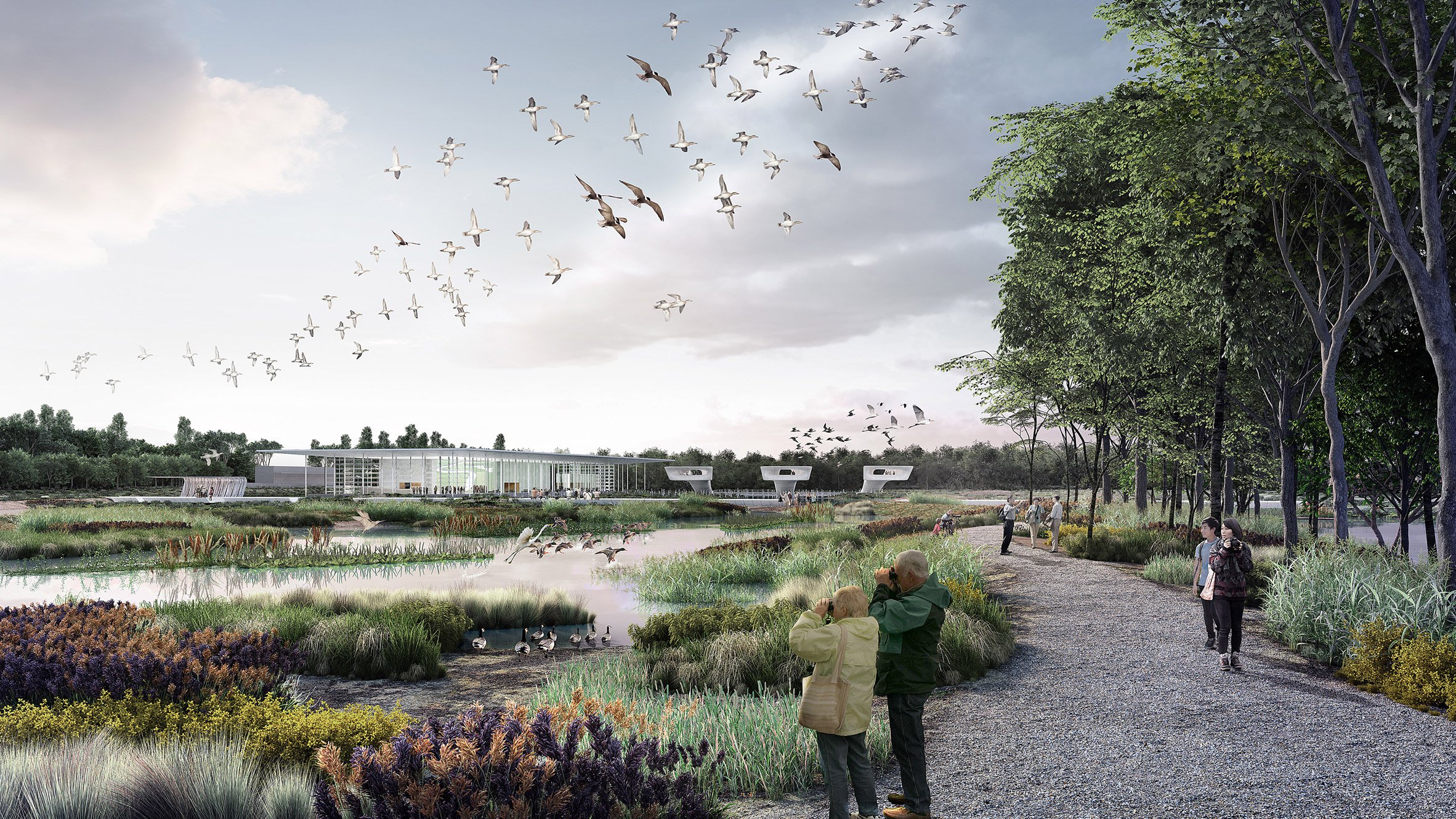 Landscape architects McGregor Coxall has won a competition to design a wetland sanctuary in Tianjin, offering migrating birds a stopover to fatten up and breed.

The Lingang Eco Park contest called for a landfill site in the city’s Lingang area to be transformed to create pockets of wetland, parkland and an urban forest along the East Asian–Australasian Flyway (EAAF).

This route sees 50 million birds make the return journey from the Arctic Circle, through East and South-east Asia, to Australia and New Zealand.

Spanning 60 hectares, McGregor Coxall Bird Airport scheme is designed to support the needs of more than 50 species of birds in three different water habitats, including an island lake with shallow rapids, a reed zone and mudflats.

A high-tech education and research centre called the Water Pavilion will cater to the 500,000 people expected to visit the site each year. Topped with a green roof, inside the centre visitors will be able to monitor the animals through cameras inside 14 bird hides.

A walkway will lead to a trio of raised observation pods where visitors can watch birds flying past.

“The proposed Bird Airport will be a globally significant sanctuary for endangered migratory bird species, while providing new green lungs for the city of Tianjin,” said the studio.

Organised by the Asian Development Bank and the Port of Tianjin, the Lingang Eco Park responds to the loss of bird foraging habitat on the shores of China’s Yellow Sea caused by coastal urbanisation. The result has seen rapid decline in the population of waterbirds, like the the Black-tailed Godwit.

“Along the flyway intertidal habitat for stopovers for migratory birds is disappearing at an alarming rate,” McGregor told Dezeen. “Over the last ten years, newly constructed sea walls enclosed one and a half million hectares of intertidal habitat.”

“Today about 70 per cent of China’s coast is now walled,” he continued. “Today there are not many places for migratory birds left to land, and to find enough food to fatten up for onward migration.”

Renewable energy will be used to move recycled waste water and harvested rain water through the wetlands.

A 20-hectare fringing forest will surround the wetlands to protect the birds from intrusion from nearby urban development. There will also be open water for waterbirds and perching posts, and a perimeter edge wetland for wetland species.

Other public facilities included in the design are wetland trails, a lake loop walk, and a cycle circuit and forest walk, making up a 7 kilometres of paths.

Construction of the Lingang Eco Park is expected to begin in 2017 and complete by 2018.

The project will function as a pilot project in the national Sponge City – a programme to use permeable materials and green spaces to prevent flooding in the country. It is one of many flood-prevention schemes being embarked on around the world.

McGregor Coxall was founded by Adrian McGregor in 1998, who was later joined by Philip Coxall in 2000. The pair studied landscape architecture together at the University of Canberra in the mid 1980s.

The firm now has offices in Australia, China and the UK and has worked on a number of projects in collaboration with Sydney studio CHROFI. Examples include a proposal for a cemetery with GPS-tracked graves and a conservatory at the Australian National Botanic Gardens in Canberra.