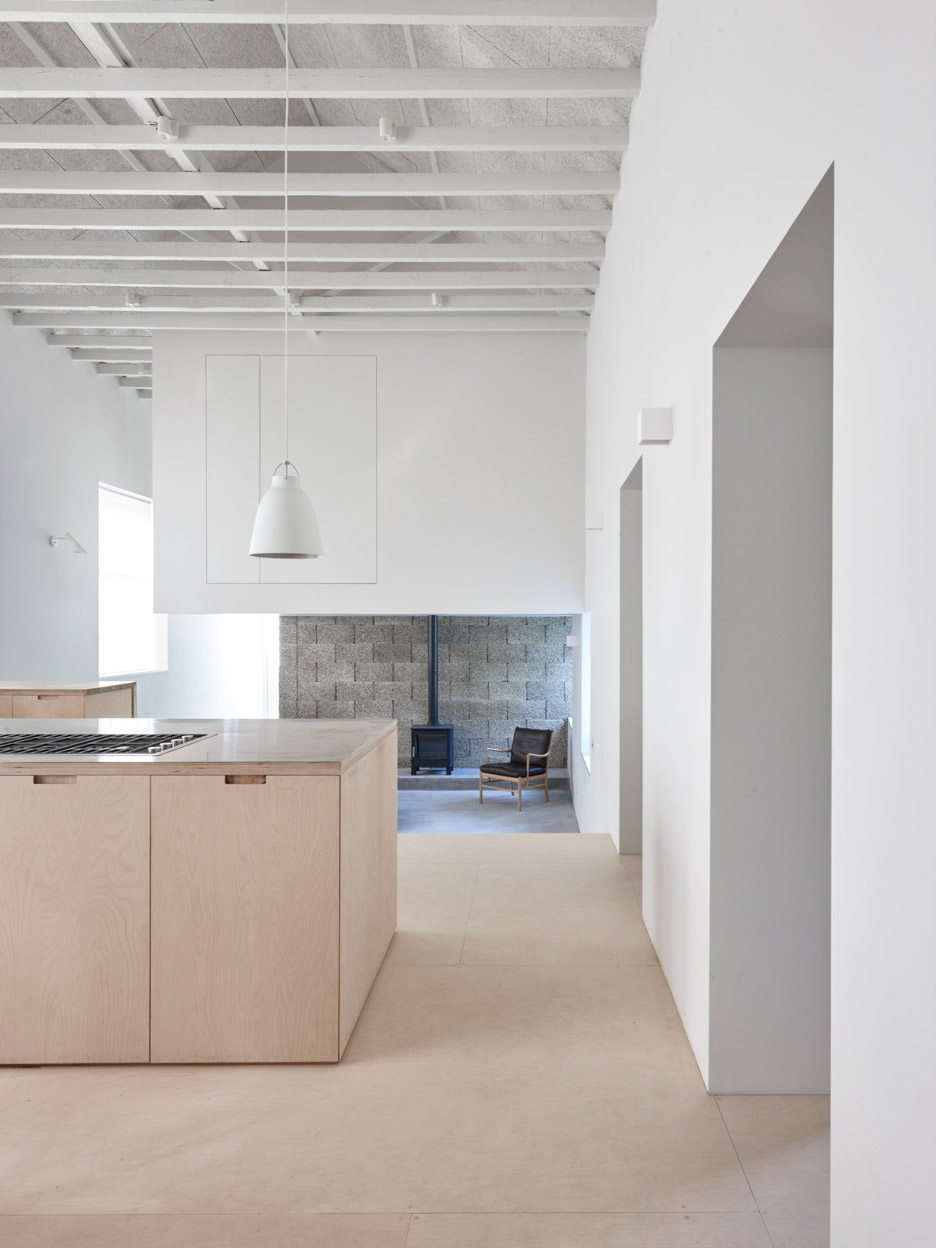 West London-based McLaren Excell has completely overhauled the building in Dorset, England. Named Merrydown, it was originally built as a girls’ school in the 19th century, but had been used as a residence since the 1950s.

“The original layout was almost monastic, one large room with cell-like bedrooms and bathrooms to one side,” explained studio co-founder Luke McLaren.

“Our brief was to strip the building bare and deliver three things: an increase in square metres, an extra storey, and a more interesting set of spaces that take best advantage of the building form,” he told Dezeen.

“The materials used are honest, hard-wearing and low in cost,” said McLaren. “They have all been left in their natural state and – together with the pleasing rhythms of the original building – combine to make a scheme of conceptual simplicity and spatial purity.”

To create the new loft, the team took advantage of previously unused space beneath the floor and above the ceiling.

“The original ground floor was sitting above a one-metre void, and the original ceiling had been suspended from the roof joists by a considerable distance,” said McLaren.

“By claiming back these untapped voids and exploiting the generous existing ceiling height of three metres, we were able to deliver two storeys without underpinning the perimeter walls or increasing the height of the roof structure,” he added.

The suspended volume accommodates two bedrooms. The exterior is rendered white, while the interior is lined with birch plywood panels that accommodate built-in storage.

Wooden panels fold back and forth across the front wall, allowing one of the bedrooms to be revealed to the double-height kitchen beyond.

“The result is a deceptively simple floating room that seems to defy logic and lends a wonderful sense of drama to the double-level kitchen,” added McLaren.

The kitchen occupies the opposite end of the building, and is the largest room in the house. It features a bespoke kitchen with birch-plywood cabinets and a golden brass worktop.

The wooden floor surface steps down to meet a living room set beneath the loft, which centres around a wood-burning fireplace.

The wide steps double as seating elements. They also form an extension of the kitchen cabinets, and include a brass handrail that continues the worktop surface.

A wall of Durisolcement – a type of cement-bonded wood fibre – provides a textural backdrop to the living room, concealing the staircase and a third bedroom tucked away behind.

This use of this material offers a reference to the building’s exterior walls, which were built from cob. This natural building material made from soil, water and straw is not actually not visible anywhere, as the exterior walls are coated with dark stucco.

Photography is by Richard Leeney.