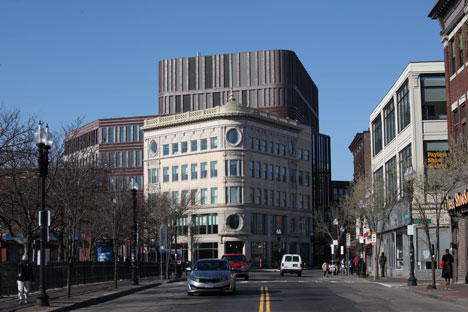 Dutch firm Mecanoo has completed its first project in the United States: an asymmetrical, brick-clad municipal building in a historic neighbourhood in Boston (+ slideshow).

Located on a triangular site in the heart of the Roxbury neighbourhood, the facility serves as the administrative headquarters for Boston Public Schools (BPS). The project brings 500 employees – formerly spread across various offices – under one roof.

The 20,000-square-metre, six-storey building also features retail and community space. The design is meant to engage the public while also celebrating the history of Roxbury and spurring its renaissance.

Described by Mecanoo as a “Bostonian building with a Dutch touch,” the new facility is an amalgamation of new construction and preserved facades from three historic structures. A variety of masonry techniques – running bond, stack bond and solider bond – establish a “playful rhythm” while also embodying a “time-honoured approach to craft in construction,” the architects said.

Community accessibility was a driving force behind Mecanoo’s competition-winning design for the building. The ground floor, called New Dudley Square, is open to the public and offers retail and gathering spaces.

The second floor houses the 280-square-metre Roxbury Innovation Center, which aims to foster new business development. This level also contains areas where students and parents can interact with BPS staff and administrators, and a double-height School Committee Room that can be used for cultural and community events.

The sixth floor contains public meeting rooms and a roof terrace with sweeping views. The design concept “challenges what an office building is, proposing new ways of working and promoting collaboration and transparency,” the architects said.

The building is also meant to help revitalise Roxbury’s Dudley Square, which has long been a major transit hub in Boston. Today it contains a busy bus terminal, but for much of the 20th century, rail lines also passed through the urban enclave.

The building is named after Bruce C Bolling, the first African-American president of the Boston City Council. The project is the centrepiece of a revitalisation plan for Dudley Square launched in 2007 by the late Thomas M Menino, Boston’s longest-serving mayor. An opening ceremony was held on 25 April 2015.