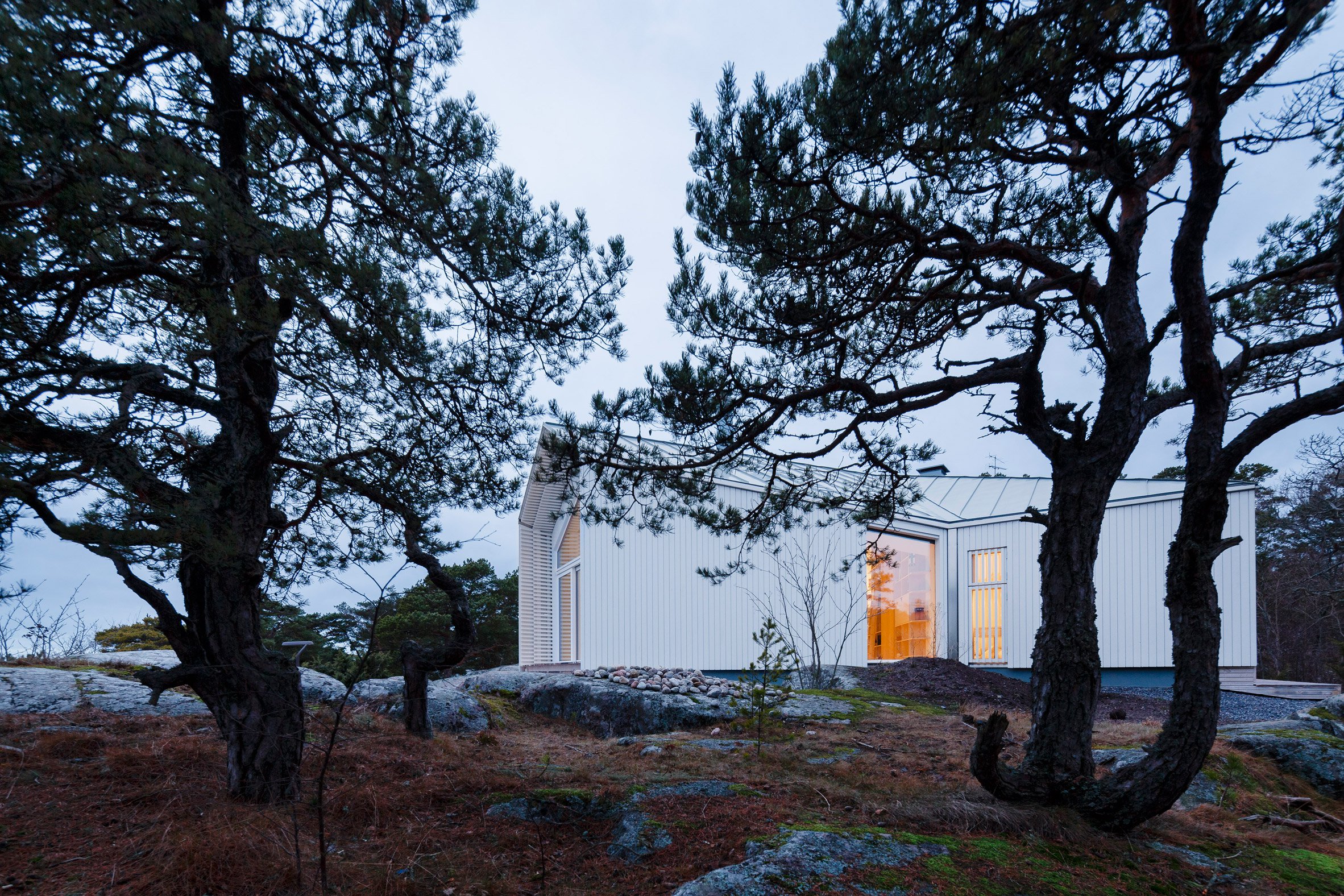 Architecture studio Mer Arkkitehdit has integrated the surrounding rocky terrain into its design for this spruce-clad villa in the historic Finnish seaside town of Hanko.

The Helsinki-based architecture studio submerged the basement level of the house by cutting into the rock, while the main floor sits atop the cliff, facing out towards the Baltic Sea and surrounding pine forests.

The entrance of the residence named Stormvillan is at beach level, with a long narrow passageway leading to glazed walls which reveal the surrounding bedrock.

At the back of the ground floor, a wine cellar is built into the cliff, with bare rock making up the room’s walls.

The villa – which was built for an elderly couple – is painted with traditional linseed-oil paint to reflect the area’s 19th-century buildings.

Hanko, which sits at the southern tip of Finland, was historically a popular spa resort for Russian nobility towards the end of the 19th century, while Finland was still a part of the Russian Empire under the rule of Alexander III.

The winding, pine tree-lined beaches are lined with elaborate wooden seaside houses built for Russian aristocrats to reside in during summer months.

Stormvillan is situated in the centre of the historic area with unobstructed views of villas designed by the acclaimed Finnish architect Theodor Höijer.

Upon entering the house, leaf-green floor tiles reference the surrounding pine forests, contrasting starkly with the otherwise white and wooden interior. Following the white carpeted staircase upstairs, the room opens out into the main living space.

The first-floor living area has vistas in three different directions: the view out towards the sea can be seen from the length of the room, while the west-facing dining room catches the evening sun, with the master bedroom taking in views of the cliffs and pine forests.

With views overlooking the Baltic sea, the flat roof of the basement level has been clad with decking and balustrades, which serves as a wooden terrace that can be entered from the main living area.

The gabled zinc-covered roof of the first floor provides a hardy and weather-resistant shelter to the wind and spray from the sea, while simultaneously blending into the coastal palette.

Stormvillan joins Gamla Villan, another of Mer Arkkitehdit’s projects built in Hanko, in which the studio provided a contemporary update of the town’s historic villas.

Another studio to incorporate the rocky terrain into their design includes Seattle-based Olson Kundig Architects, who used dynamite, chippers and saws to bore through the huge boulders of a rocky outcrop on a North American island to make room for its raw concrete house.