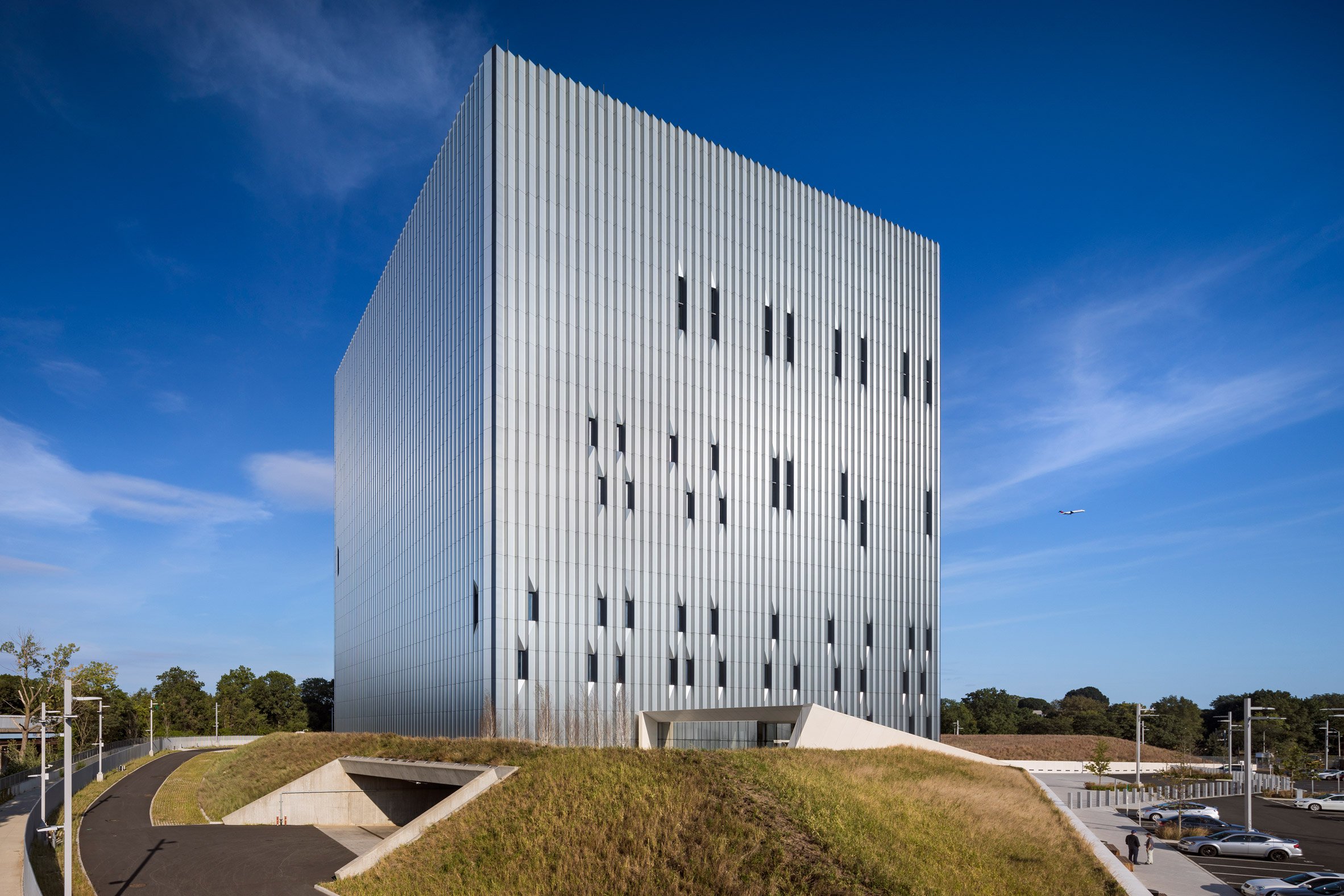 The Public Safety Answering Center II, or PSAC II, occupies a prominent nine-acre (3.6-hectare) site in the Bronx – one of New York‘s five boroughs. The building sits at the intersection of two major roads.

Intended to strengthen the city’s 911 emergency response system, the building serves as a back-up facility for a primary call centre. The centre houses workers from multiple city agencies, including the police department, fire department and emergency medical services.

“Continuously operating and highly secure, the building enhances the city’s ability to maintain communication in the event of a natural disaster or large-scale emergency,” said Skidmore, Owings & Merrill (SOM), a global firm founded in 1936.

“With its design, SOM confronted the challenge of creating a secure and functional building that also makes a positive contribution to its urban context.”

Conceived as a perfect cube, the structure has limited apertures due to security concerns. To soften the building’s potentially monolithic appearance, the design team created serrated facades that are partly made of recycled aluminium.

A paved walkway leads to the entrance lobby, which is situated within a quiet, low-lying volume affixed to the cube. Glazed walls bring natural light into the space.

Surrounding the facility is a sculptural berm blanketed with wild grasses, which require no irrigation.

“This berm serves as a barrier to protect the facility, and it also enriches the aesthetics of the site,” the firm said.

For passing motorists, the berm also hides from view a surface parking lot and a loading dock.

Inside the 450,000-square-foot (41,800-square-metre) building, spaces are infused with calming design elements, such as wooden wall panels and a neutral colour palette.

“SOM gave special attention to creating a soothing environment for the emergency response teams working inside,” the team said.

The main gathering area features a verdant living wall developed by the Center for Architecture Science and Ecology, a design research laboratory supported by SOM and Rensselaer Polytechnic Institute.

“This plant wall not only introduces nature into the building, but also filters the air and reduces overall energy use,” said the team.

The wall is one of many sustainable features in the facility, which aims to achieve LEED Gold certification from the US Green Building Council.

The completion of PSAC II marks a major milestone in the overhaul of New York’s 911 system, a long-term initiative begun by former Mayor Michael Bloomberg.

Other public projects in New York include a sculptural salt shed in Manhattan designed by WXY and Dattner Architects, and a proposed police station in the Bronx designed by Bjarke Ingels Group.

Photography is by Albert Vecerka from Esto Photographics.