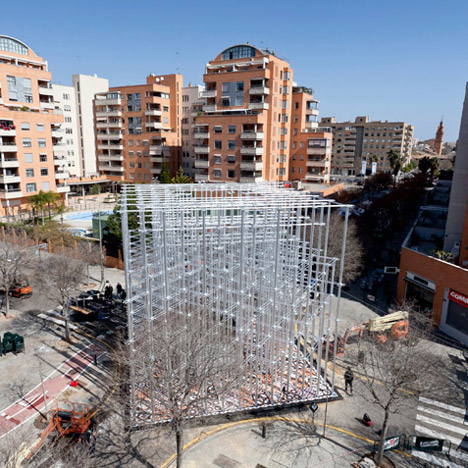 Shiny cardboard tubes were arranged in a patterned grid to create this cube-shaped pavilion in Valencia, designed by art collective Pink Intruder (+ slideshow).

The Ekklesia pavilion – named after the principal assembly of Athenian democracy in Ancient Greece – was installed to coincide with the city’s Fallas music festival in March.

“The installation represented a temple where citizens can meet and realise the power they have to change things through debate and confrontation of ideas,” said a statement from Pink Intruder.

“Its function was to highlight a lost heritage and to emphasise that any innovation in a traditional context should be based on a thorough knowledge of tradition.”

The structure comprised eight different horizontal layers that were supported at various heights on a seven-by-seven grid of vertical columns.

These layers were formed from parallel pairs of thin cardboard tubes, which fed into connector elements at each joint with the thicker uprights.

The first set of short lengths, raised 2.8 metres above the base, zig-zagged between the outer two rows of columns. Just over a metre above, the next level bridged across to the next set of verticals in the same way.

The next four layers slowly filled up the remaining space towards the centre, so the structure appeared to become denser towards the top.

Related story: France’s Expo pavilion is a wooden lattice with plants and food slotted into its crevices

For the final two layers, the beams were oriented perpendicular to the square outline of the base rather than at diagonals, creating an additional overlaid pattern.

A square gap was left in the top of the uppermost level, under which a perforated surface patterned with overlapping circles was suspended.

The metallic finish of the tubes shimmered in the sunlight, while LEDs were used to illuminate them after dark.

Some of the columns were printed with political messages “to highlight the emptiness of political discourse and the need to provide it with content to generate discussion and be owners of our future,” according to Pink Intruder.

Beneath the structure – which bears a resemblance to Sou Fujimoto’s 2013 Serpentine Gallery Pavilion – 96,000 pieces of tile form a mosaic that echoes the shapes that appear above.

The design is based on a Nolla Mosaic, a traditional Valencian tile pattern that fell out of use in the middle of 20th century.

“We wanted it to be a participatory project and therefore the completion of the mosaic was made in different workshops with children at risk of social exclusion, and various neighbourhood associations,” the team said.

Cardboard is a favourite construction material of Pritzker Prize-winning Japanese architect Shigeru Ban, who has used tubes of the heavy-duty paper to build a temporary pavilion in Madrid and a tea house that was auctioned off in 2008.

Ban also used the material to build a temporary cathedral for Christchurch, after an earthquake devastated the city’s Gothic Revival stone building.

Photography and video are by Noel Arraiz.