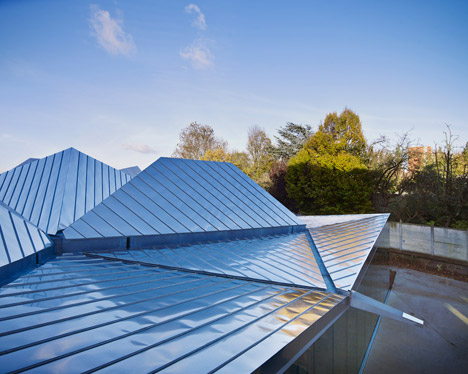 Triangular skylights set into a faceted stainless-steel roof direct daylight into the reading room of this library that Tank Architectes has completed in a converted police station in France (+ slideshow).

French studio Tank Architectes was responsible for repurposing the 1930s building as part of the development of a new public space at the centre of La Madeleine, a town on the outskirts of Lille.

The original building faces the central market square and now provides a cultural hub for the local community.

The first step in the police station’s renovation was to make it more accessible to the public by lowering the entrance and the sills of the existing windows to street level.

New glazed openings provide views out from the formerly closed gable ends, while the old stonework was freshened up with a coat of white paint.

“The facility has been designed as a third place between home and workplace,” the architects told Dezeen. “The existing building is largely open to make it more transparent and to create a continuous public space on the ground floor.”

A reception area, auditorium, cafe and teaching space are contained in the original building. An empty triangular plot at the rear of the building provided an opportunity to expand the facility, so the architects added a large reading room within a contrasting modern structure.

The building’s location at the boundary between industrial and more residential districts influenced the angular shape of the roof, which combines elements from the pitched roofs of typical houses and the sawtoothed profiles of factory buildings.

Skylights atop the truncated pyramidal sections fill the reading room with soft and diffused north light, like in a factory.
Meanwhile, the shapes on the underside are intended to give the interior a more human scale by evoking the coffered ceilings of libraries in grand townhouses.