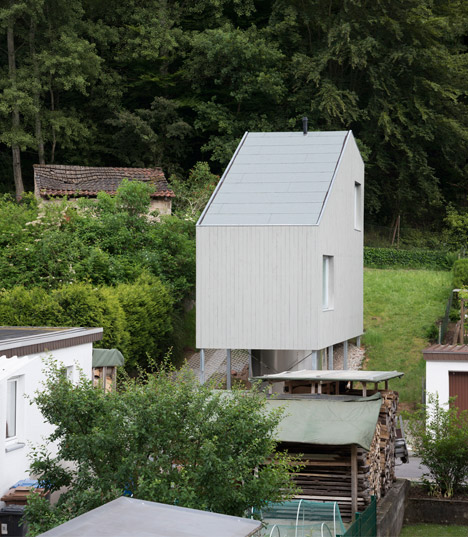 Designed by local studio Architekturbüro Scheder, Small House sits between two buildings on the edge of a forest in Hohenecken, just outside the city of Kaiserslautern in south-west Germany.

There are only two rooms inside the structure, which is 12 metres long and just 3.5 metres wide.

The architects were unable to make it any larger, because planning regulations stipulated that a three-metre gap be left between the new structure and its neighbours –  leaving only a 3.5-metre strip to build on.

Vertical planks of grey-painted Douglas fir cover the building’s spruce formwork. This timber cladding lends a shed-like appearance to the structure, while an asymmetric half-pitched roof follows the gentle incline of the hill.

Galvanised steel posts and a stout cylindrical podium – used as a utility and storage space – elevate the front of the house to be level with the ground at the rear.

From the street the house appears as a small wooden box, but when viewed in profile its scale seemingly expands to reveal elongated asymmetric gables. The architects describe the form as “familiar and yet strange”.

“Depending on the angle it appears small and compact or long and slim,” they explained. “A space continuum with differentiated spatial impressions ranging from narrow and wide, low and high to small and large.”

Landscape windows set in the two gable ends frame views of the forest and adjacent properties, while the street-facing facade is entirely windowless.

The interior is finished simply, with white-painted fibreboard walls and pale maple floors. A staircase with open risers and matching light-timber treads leads from an open-plan kitchen and living area to a bedroom and bathroom located on the upper floor.

A large window and glazed doorway form the back wall of the living area and create the building’s entrance.
Perforated paving surrounds the building, but planting will eventually grow up through the gaps to blend in with the surrounding grass.

Rather than being commissioned to create a building on the narrow plot, the architects spotted it themselves while working on another property on the street. They then found funding through a private developer to build, but the house is not occupied.
Photography is by Maya Wirkus.
Axonometric diagram
Site plan
Floor plans
Long section
Cross section
The post Micro house by Architekturbüro Scheder is raised off the ground on stilts appeared first on Dezeen.