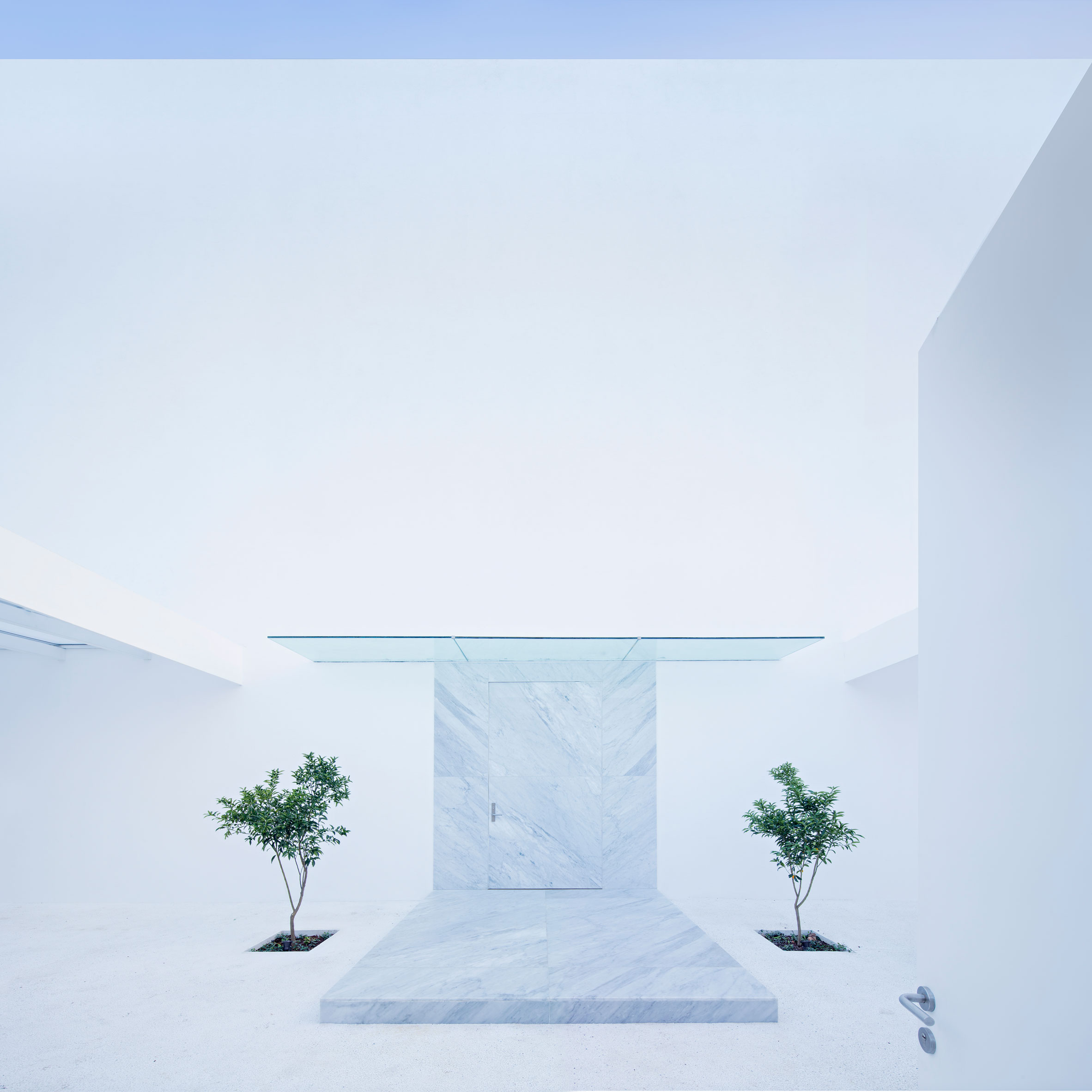 The stark white surfaces that dominate this minimal house in Monterrey, Mexico, are interrupted by a golden wall that elevates the quality of light inside.

Behind its blank facades sits a double-height wall covered in gold leaf, oriented to reflect the south light that streams in through a high window.

The architect aimed to recreate the light qualities found in houses like Casa Gilardi in Mexico City by legendary Mexican architect Luis Barragán, who Campo Baeza cites as a major influence.

“If Barragán is always present in all my architecture, he is even more in this case,” the architect said, “which is why I decided that not only would my house be flooded with light, but that it would be the golden light of Barragán.”

The cuboid building, which presents no windows to the street, rises above a perimeter wall that encloses a garden on four sides.

A symmetrical front facade includes two large ports for cars, positioned either side of a smaller central opening.

Once beyond the barrier wall, the main entrance is highlighted in grey marble – both on the ground and up the wall containing the front door – and sheltered by thin sheets of glass.

Functionally, the house is divided into three horizontal planes. The ground floor features the entertaining areas, the first floor is designated for sleeping, and the roof acts as a private relaxation space.

Symmetry continues in plan, with each storey arranged as strips of spaces that run from the front to the back of the property.

On the ground floor a kitchen and dining area sit to one side, while a bar and home theatre are located on the other.

Both can be separated off from the central double-height living room by sliding partitions, and all three spaces open onto a porch at the back.

The next level accommodates the master suite and two smaller en-suite bedrooms, connected by a generous landing that overlooks the living space.

It is here that the golden wall is installed – bouncing the light from a clerestory window, past a frameless glass balustrade and down into the void.

“After creating a diagonal space resulting from concatenating two spaces of double height, I decided to gild the high vertical wall on which all the southern light would fall and fill it with this much-coveted golden hue,” Campo Baeza said.

Below the other side of the window on a decked roof terrace is a small swimming pool, from which bathers can enjoy a framed view of the mountains beyond.

Light-coloured stone is used as flooring for the interior, which is minimally furnished with mid-century pieces.

“I did my utmost to ensure that this house would be the most beautiful in the world,” said Campo Baeza. “That is my stated intent with every new project that falls into my hands.”

The Spanish architect is known for his minimalist architecture, and has designed a variety of houses in his home country. They include a seaside home in Cádiz with a roof that stretches out towards the shoreline, a residence for a poet in Zaragoza where high concrete walls enclose a secret garden, and a hilltop retreat in Toledo that features delicate glazing fitted around a bulky concrete structure.

Photography is by Javi Callejas.

The post Minimalist house by Alberto Campo Baeza and GLR is bathed in “golden light” inside appeared first on Dezeen.