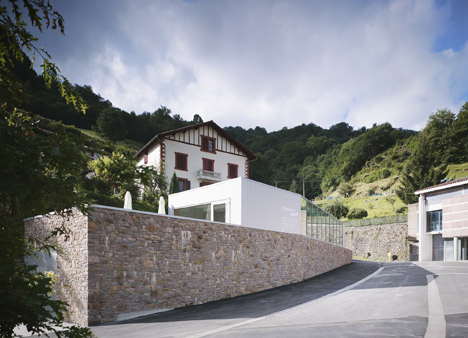 An aluminium and glass box sits over a long stone wall to form the facade of this mining heritage centre in the French village of Banca, by Toulouse studio V2S (+ slideshow).

The village in the Pyrénées-Atlantiques region in south-western France has a history of mining that V2S was asked to promote with its design for a visitor centre on the route between Saint-Étienne-de-Baïgorry and the Spanish border.

The Mining and Metallurgy Heritage Centre and Cafe is situated in the village’s main square and provides both a tourist attraction and a place for locals to socialise, which had been missing since the closure of Banca’s only bar a few years previously.

“We created this project as a lighthouse representing the life of the village and providing a place where people could meet,” architect Vincent Candau told Dezeen. “The village is a bit isolated so we wanted to build a new public space for them.”

The building’s form and materials are influenced by the traditional architecture of the region, which consists of structures sited on terraces carved into the mountainous landscape.

Retaining walls propping up these terraces are a common feature in the village, and the architects constructed their own wall to traverse the three-metre incline on the heritage centre’s site.

“We felt it was necessary to integrate the project into its environment, especially so the residents would adopt it,” Candau explained. “We imagined the building as a continuity of the existing supporting walls, which have been part of this hilly landscape for years and years.”

The stone wall follows the line of the road as it curves up the hillside and juxtaposes with the metal and glass box above, which contains the cafe and an information point.

An opening at the lower end of the retaining wall provides technical access to the museum. The entrance to the cafe is located at the building’s higher end and opens out to a terrace.

The centre’s upper section is clad in aluminium, designed to give it “a smooth and reflective coating”. It incorporates a large window that fills the cafe with daylight, and provides views towards the valley from a line of stools positioned along a raised sill inside.
At night this window creates the desired “lighthouse effect” that enables the building to be seen from across the valley.

A simple palette of wood, concrete and metal used in their raw state gives the interior a straightforward and robust aesthetic.
Technical amenities including the kitchen, toilet and a lift are arranged along the embankment side of the upper level to free up the rest of the floor space.

Permanent and temporary exhibition halls are located in the subterranean space behind the retaining wall. The lack of daylight and views in this space were considered particularly suitable to its use as a museum dedicated to the history of the local mining community.
The materials used below ground are the same as in the cafe. Information is printed directly onto plywood panels fixed to vertical birch battens.