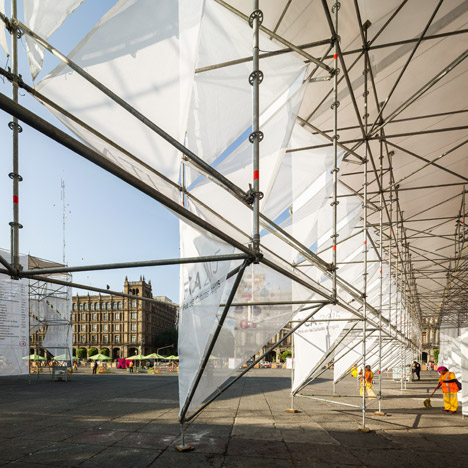 It took just three and a half days to erect this temporary 6,000-square-metre structure in Mexico City’s Zócalo plaza, because architecture studio MMX chose to build it from scaffolding and canvas (+ slideshow).

MMX, a team of four architects based in the city, designed the group of temporary buildings for the Feria de las Culturas – an annual fair that promotes the cultures and traditions of other nationalities.

They chose to use steel scaffolding to build the structures, as they felt it offered the most flexible solution and the fastest construction turnaround.

“The structural system has been deliberately chosen as a response to the temporality and the assembling efficiency required,” explained architect Emmanuel Ramirez.

Related story: GASP! by Room 11 is a sequence of riverside pavilions and boardwalks

“Thus, a triangulated scaffolding strategy is developed as one of the only possibilities that could ensure a 6,000-square-metre structure be assembled in only three and a half days,” he said.

The canvas panels were strung up between the metal beams to create the impression of a folded origami-like volume.

“While the scaffolding geometries define the volume of the inhabitable envelope, the facade mesh makes the structural three-dimensional logic visible,” added the architect.

Three long and narrow buildings were created within the square, oriented to line up with the buildings and streets that surround the site. These accommodated the various stands, which were organised by region.

Where the three buildings met, a triangular pavilion was also built. With integrated bleacher-style seating made from wooden boards, it formed a small auditorium for staging various performances.

“In order for the FCA to be successful, as well as to ensure shade and comfort to visitors during the fair, the main plaza needed to be subdivided into smaller urban atmospheres,” said Ramirez.

“The different radial structures of the scheme reconfigure the Zócalo into three different public open spaces, changing the urban scale of the public realm.”

Dating back to the 15th century, Zocalo is the most significant public space in the city and hosts the Feria de las Culturas every year. The 2015 edition concluded on 27 May.

MMX – whose projects include a concrete residence arranged around gardens – described adding architecture to it a “great challenge”.

“There is no other space where it becomes evident that every single architectural intervention turns out to be political,” said the team.

“The Zocalo however is dynamic and able to cope with such diversity of temporary architectural explorations.”

The post MMX uses scaffolding and canvas to build a cluster of origami-like pavilions in Mexico City appeared first on Dezeen.