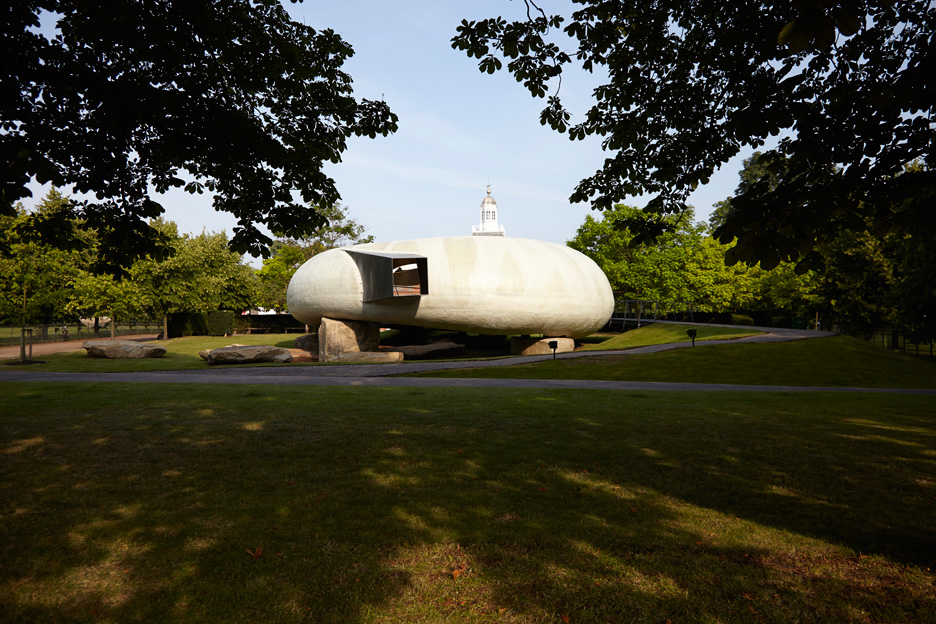 Movie: in the final instalment of our exclusive video series, Serpentine Gallery director Julia Peyton-Jones reflects on Smiljan Radić‘s use of handmade paper models to design his bulbous pavilion in 2014.

“He designed something that, playfully, looked like a doughnut, or an egg,” Peyton-Jones says in the movie, which Dezeen filmed at the Serpentine Gallery in London.

Model making was an important part of Radić’s design process, Peyton-Jones says, recalling a particular model she saw at his studio made from paper Burda sewing patterns.

Related story: Smiljan Radić’s Serpentine Gallery Pavilion looks like a crude model “made by a giant”

“The models he made were key,” she says. “There was one model covered in patterns for making dresses, and this became the basis of the pavilion that we then built on the lawn.”

Radić’s pavilion was raised up from the ground by a series of quarry stones. The doughnut-like shape created an open-air courtyard in the centre, which visitors could look down into from balconies.

“We talked about it as a sort of Romeo and Juliet effect,” Peyton-Jones says. “You could call across to somebody on the other side. There was a huge sacrificial stone on the lower level, which was a kind of performance space.”

Visitors entered the structure via a raised walkway, which led up from the ground in front of the gallery to a small cafe and seating area inside the pavilion.

Once inside, visitors could look out onto the surrounding park through a series of openings cut out of the fibreglass structure, including a protruding metal balcony on the front of the pavilion.

“Even though it was so small, there were different experiences within it,” Peyton-Jones says.

“I think that quality – even in such a contained space – is one of the things that is notable not only about this project but of so many of the projects that have taken place on our lawn.”

Dezeen has been looking back at each of the gallery’s pavilions from 2000 to 2015 in a series of videos. You can watch all the movies on our YouTube playlist:

The post Model making was key to the design of Smiljan Radić’s Serpentine Gallery Pavilion in 2014 appeared first on Dezeen.