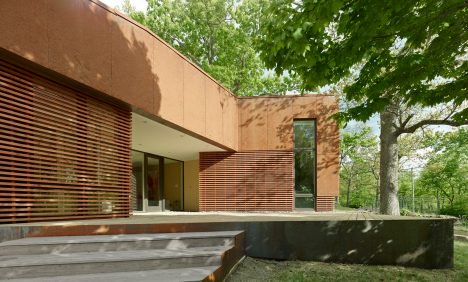 American firm Modus Studio has drastically revamped a ranch-style house in Arkansas by covering the front facade in cedar and Corten steel, and adding an angular extension (+ slideshow).

Called 560 Vinson, the residence is located in Fayetteville, an Arkansas city that is home to the esteemed Fay Jones School of Architecture and Design. The three-bedroom home is situated on Mount Sequoyah, a large, wooded hill near the downtown area.

The architect was charged with completely transforming an existing brick ranch-style home. The clients wanted a “creative and modern approach” that would result in light-filled spaces and framed views of the terrain.

“With deep ties to the surrounding neighbourhood, there was also a desire to tastefully censor the adjacent homes without completely severing their connection to this charming community,” said Modus Studio, a Fayetteville-based architecture and fabrication studio.

For the lower portion of the street-facing facade, the architects added a cedar rainscreen that is meant to evoke “a slowly honed piece of driftwood”. The upper portion is clad in Corten weathering steel.

“Inspired by time’s ability to patina and alter materials, the changing tones of the facade are at the heart of the design concept,” the architects said.

The natural materials and their “deep and inviting hues” give the home a striking appearance, the studio added.

Rectilinear in plan, the original house contained small, segregated spaces with conventionally sized windows. The firm opened up the main living area and incorporated layers of transparency, in turn blurring spatial boundaries within the dwelling.

The architects also created an angular extension, with a shape influenced by the desire to protect a large oak tree in the front yard. The addition also intentionally blocks views of adjacent properties from the driveway.

Within the extension, occupants have sight lines of both the interior and exterior.

“This formal shift not only creates the cradle-like entry space for visitors, but also allows the resident to experience the interior and exterior of the home simultaneously through planes of glass and cedar,” the studio said.

Throughout the home, glazed apertures enable natural light to flood the interior. Floor-to-ceiling windows provide a seamless connection between the primary living zone and a generous front porch.

Other homes in Arkansas including the prefabricated Cantilever House in Little Rock by students at the Fay Jones School of Architecture and Design and the Mood Ring House in Fayetteville by Silo AR+D.