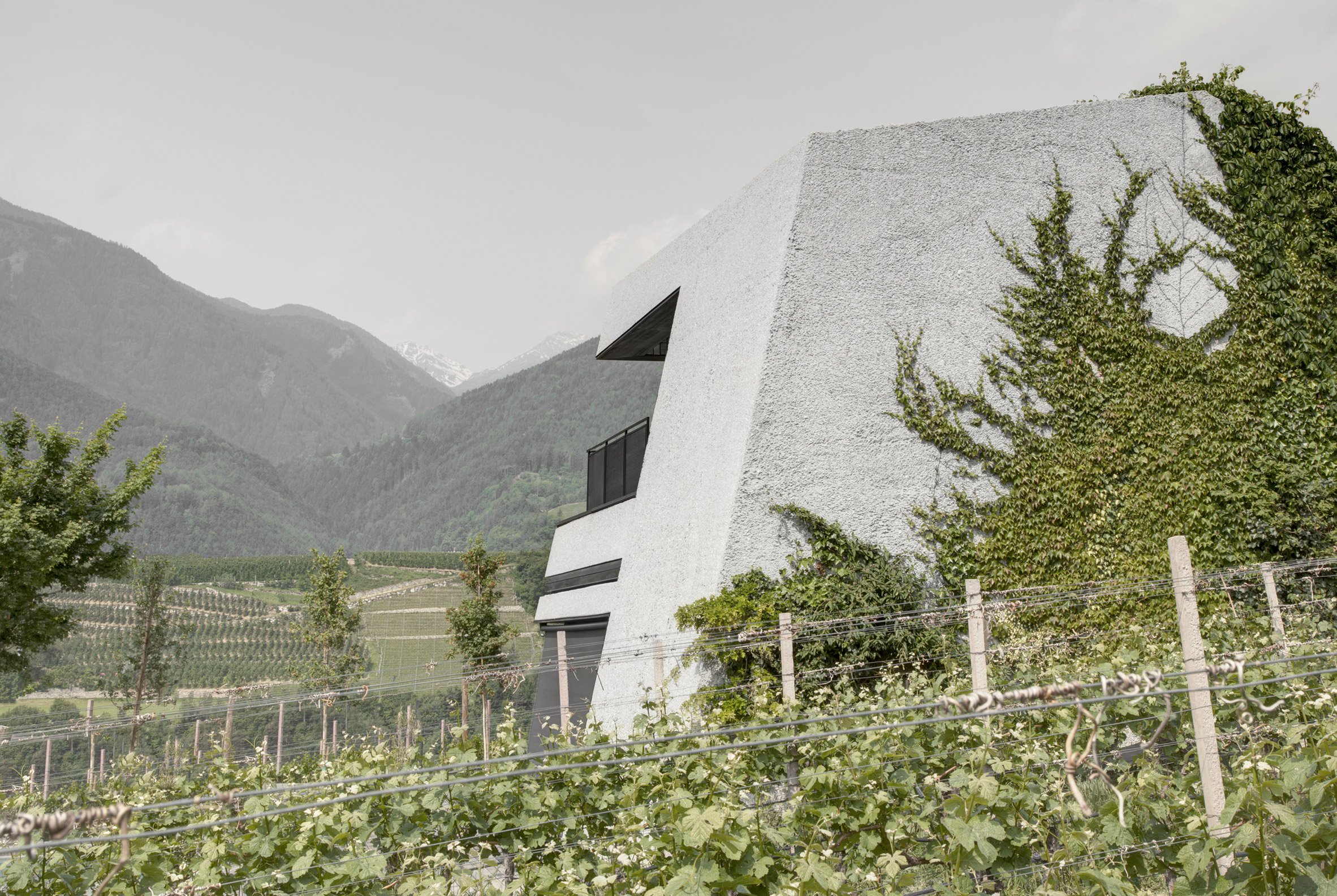 Monolithic concrete house by Bergmeisterwolf emerges from an Alpine hillside

This bunker-like house in South Tyrol by local studio Bergmeisterwolf features an angular cutout that shelters a balcony overlooking the nearby valley.

The house is situated next to a farmhouse occupied by the owner’s parents on a sloping site near the village of Neustift and close to the border with Austria.

The building rises above the surrounding vineyards to provide views towards the Neustift monastery and the village in the valley below.

“The structure grows up from the terrain and rises together with the landscape,” said the studio‘s founders Gerd Bergmeister and Michaela Wolf.

“It becomes part of nature, integrated with the vineyard and the landscape,” added the architects, whose other projects in the area include a group of holiday apartments that reinterpret traditional log-cabin construction.

The building’s elongated form follows the slope of the hillside site, with a two-storey elevation at the lowest point giving way to a single level further up the slope.

A wing extending from one side of the main volume cranks around the edges of a decked terrace and sheltered garden.

This single-storey section is partially clad in rustic stone and is topped with a planted roof that helps the building to merge into its surroundings.

The remainder of the house’s facades and roofs are covered with a rough concrete render that lends it a monolithic feel and enhances the angular composition of surfaces.

The facade looking down the hillside is interrupted on its upper storey by a large aperture accommodating a balcony, while the lower floor is lined with glazing that looks onto a deck and small pool.

An entrance carved into one side of the upper portion of the house descends beneath the roof into a living area containing a cylindrical concrete fire surround.

Sofas are arranged around an angled nook beneath the slanted ceiling and the living space is separated from a sunken dining area by a wooden shelving unit.

A bedroom suite is accommodated on the lower level of the long volume flanking the garden. The sleeping area is separated from a bathroom by a glazed partition.

Concrete used internally for surfaces and structural elements including a diagonal stringer supporting the staircase is smoothly finished in contrast to the exterior.

Other surfaces and fitted joinery including the stairs and shelving units are made from wood with a strong grain that introduces a natural texture to the interior.

The post Monolithic concrete house by Bergmeisterwolf emerges from an Alpine hillside appeared first on Dezeen.