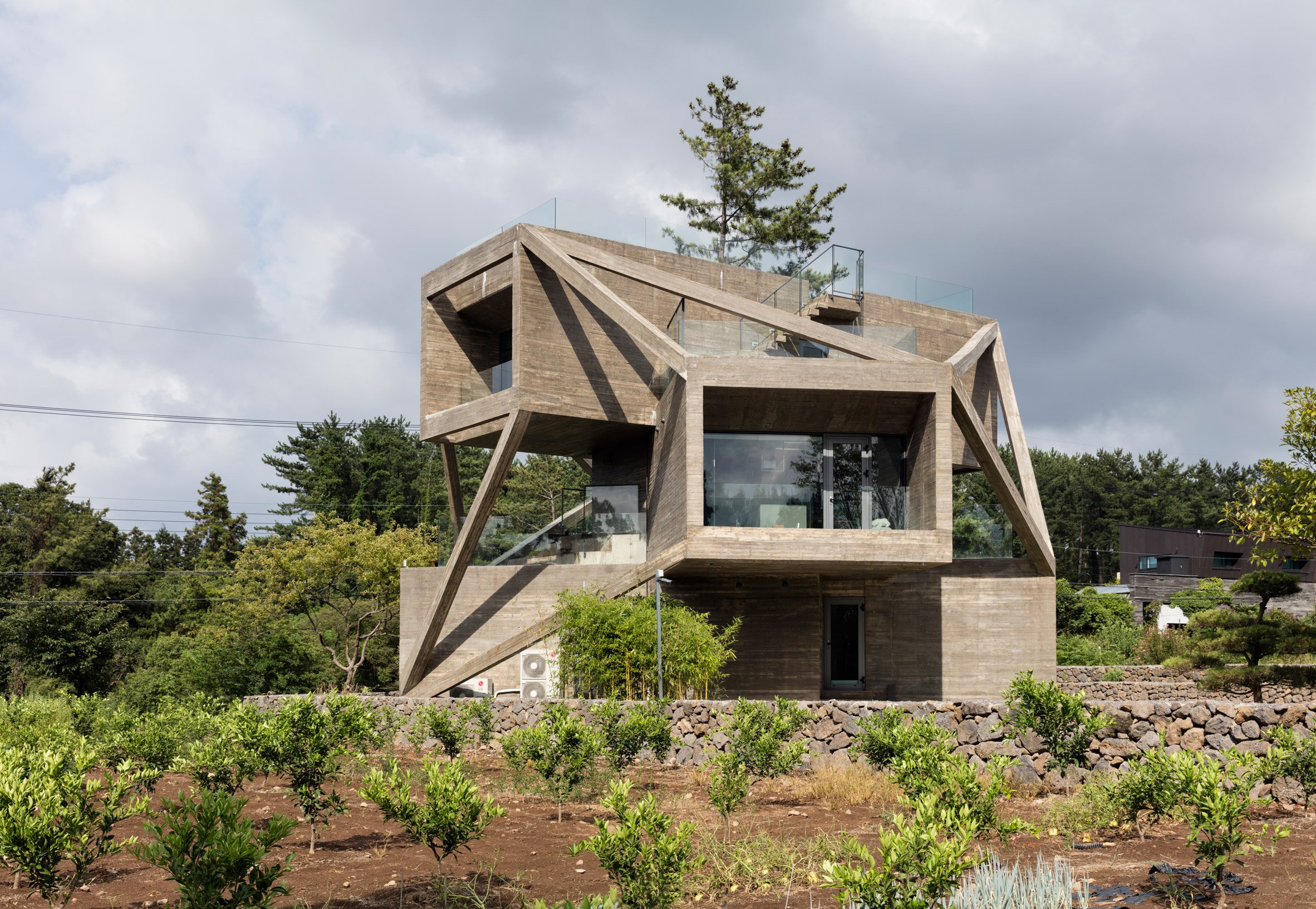 South Korean architect Moon Hoon has completed a concrete house on the island of Jeju, featuring cantilevered boxes stacked on top of each other and braced by diagonal reinforced-concrete beams.

Moon Hoon designed the building for a plot on South Korea’s largest island, which is located to the south of the Korean peninsula and is a popular holiday destination.

The island’s tropical climate, attractive beaches and lush vegetation attract many visitors, but its location also means it is exposed to changeable weather and strong winds that impact the local architecture.

Moon Hoon’s Seoul office originally proposed a simple, bunker-like single-storey property that respond to the client’s request for a home suited to their private lifestyle.

However, the client later changed their mind and asked for a more distinctive design, which prompted the studio to replace the humble structure informed by traditional Jeju homes with a far more expressive building.

In place of the low-lying house, the studio created a three-storey building named Simple House that comprises robust board-marked concrete volumes layered vertically and angled to make the most of the available views.

Openings at the ends of each section are filled with glazing to capture daylight and views of the surroundings.

In response to the need for a more unique aesthetic, and to protect the vulnerable structure from harsh weather, the architects added diagonal braces that connect the corners of the boxes.

“The erected houses now boasted much presence, but needed something more to give it a distinct character,” explained the studio in a statement.

“Then the strong wind and rain started cracking the floors, and slowly the three-floor and rotating home came into existence. Too much wind gave nausea and anxiety. Something had to be done, thus the binding structures between the end points to other points.”

The final layered composition provides usable outdoor spaces on the roofs of the lower levels, which are accessible from the living areas on each floor.

An al-fresco dining area is situated off the kitchen on the first floor, with a small garden and patio on the opposite side. Another garden and a terrace with space for a jacuzzi are accommodated on the level above.

At the centre of the building is a void containing a twisting timber staircase lined with built-in bookshelves. A skylight at the top of this circulation space allows daylight to filter down through the various levels.

A window and a glazed door leading out onto the first-floor patio also reinforce the connection between the stairwell and outdoors.

The ground floor contains an entrance sheltered beneath the overhanging volume above, as well as a playroom and a spare room used as a home gym at either end of its elongated plan.

The stairs ascend to a first floor housing a kitchen and dining area at one end, with a lounge space at the other. A toilet is squeezed into a corner next to the stairs, with a curving wall separating it from the kitchen.

The upper storey contains the master bedroom and a bathroom on opposite sides of the stairwell. The bedroom is flanked by full-height glazing and doors onto terraces on two sides.

An external staircase leads up from the jacuzzi patio on the second floor to a large roof terrace lined with glass balustrades that provides panoramic views of trees and neighbouring rooftops.

Moon Hoon’s studio is known for its idiosyncratic architectural style, and has produced several unusual formed buildings including a concrete housing block designed to resemble an owl, and a museum for a Pinocchio-doll collector featuring a nose-shaped fountain.

Photography is by Namgoong Sun.