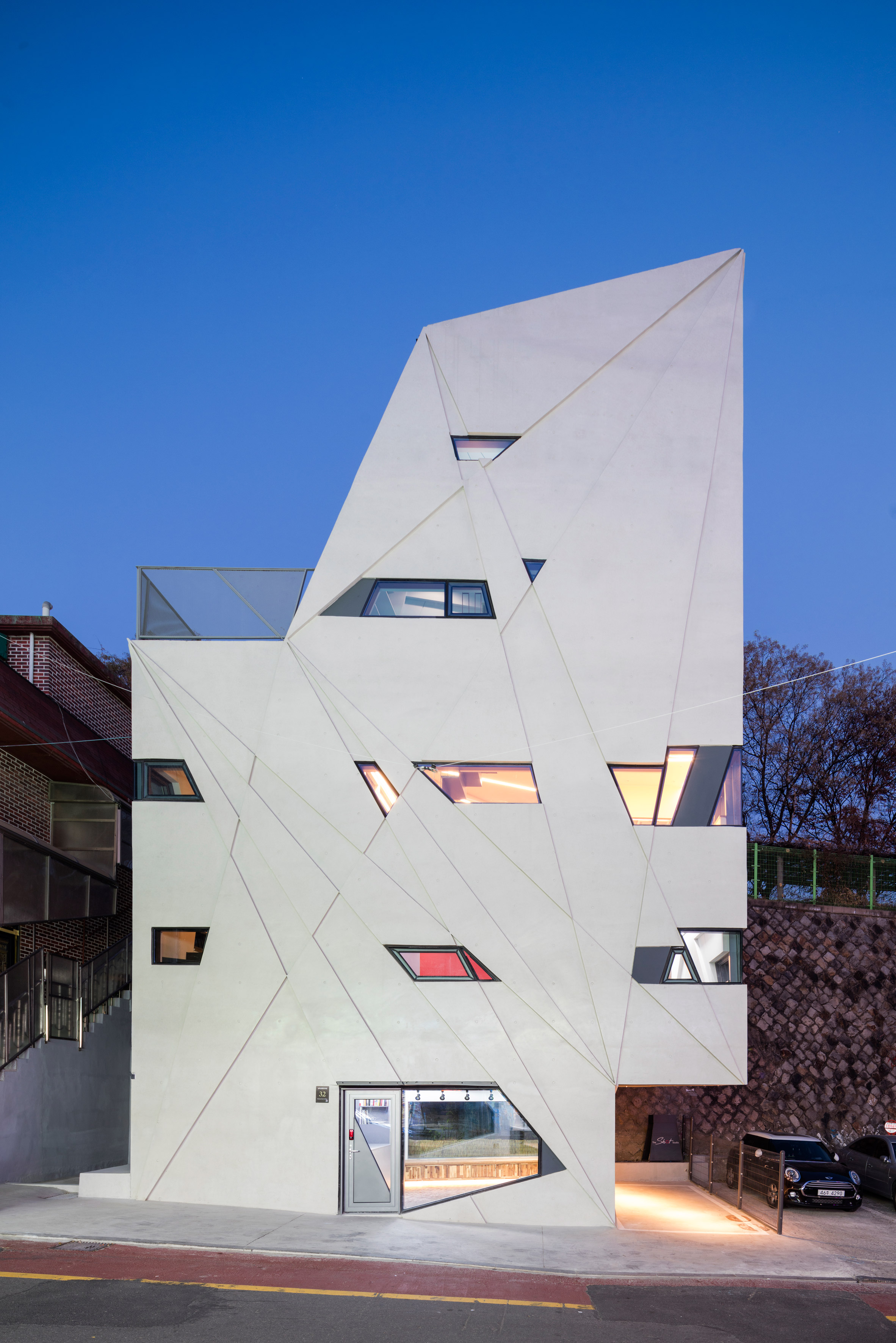 This towering Seoul residence created by South Korean architect Moon Hoon for a photographer and his mother, features a relief-patterned facade punctured by small windows.

Moon Hoon based the design of the home in the city’s Gangnam neighbourhood on the personality of his client, as well history of the plot, which was formerly occupied by a fortuneteller and shaman.

The interior is finished using a variety of woodwork techniques including parquet flooring and chequerboard tiling.

“It reflects the client’s personality in a frank manner,” said Moon Hoon. “Considering that the client purchased the plot of a fortuneteller and a shaman beside a tall wall in Gangnam, this is a world that must be full of many unexplainable things.”

This volume comprises a five-storey-high peak on the road facing side, and a three-storey-high block on the other that steps up from an existing tall wall.

Raised and recessed sections create a diagonal pattern across the taping facades of the building. These markings feature as deep cuts along the walls inside the building.

Openings are cut into the various shapes created by the lines but are made to be small, because the architect wanted to maintain the client’s privacy in the high-density area.

“I feel uncomfortable whenever I see contemporary buildings with large openings,” said Moon Hoon. “Such an entrance could be even worse if it is for a residence because personally I think it is often feared that it would only allow too much light inside and violate my privacy.”

“I proposed small and unique windows to my client for this project,” he continued. “It has resulted in a space that has both sufficiently bright spots and dark ones.”

Inside, the bathrooms are stacked in the smaller of the two towers. The final floor of this tower is solely occupied by a corner bath with a window that offers views across the city and is topped by a skylight.

Glass doors on the street-facing side of the property lead into the entrance hall, which has black parquet flooring and blue-painted walls.

A narrow staircase with rectangular black-and-white patterned tiles and a tall white metal banister leads down to the basement photography studio. The space is painted completely white apart from the wall beneath the staircase.

The main staircase leads up to a bedroom and study, and a small dressing room. Wooden parquet flooring here is contrasted by walls painted grey, white and red, and glass doors separate the chequerboard bathroom.

The next floor features an open kitchen, living and dining room with white-painted walls, and wooden fitted furniture that creates a stepped platform.

The thinner third floor features high ceilings and includes a skylit dressing room and a bathroom.

Glass doors open to a terrace that wraps the building, where it is possible to gaze down into the corner bathroom.

Moon Hoon, who came in at number 118 among architects on the inaugural Dezeen Hot List, is known for his unusual designs.

Other projects by the architect include a housing block with owl-like features, a museum dedicated to the fictional character Pinocchio and a holiday home on Jeju Island with a copper observation pod modelled on the head of a windswept woman.