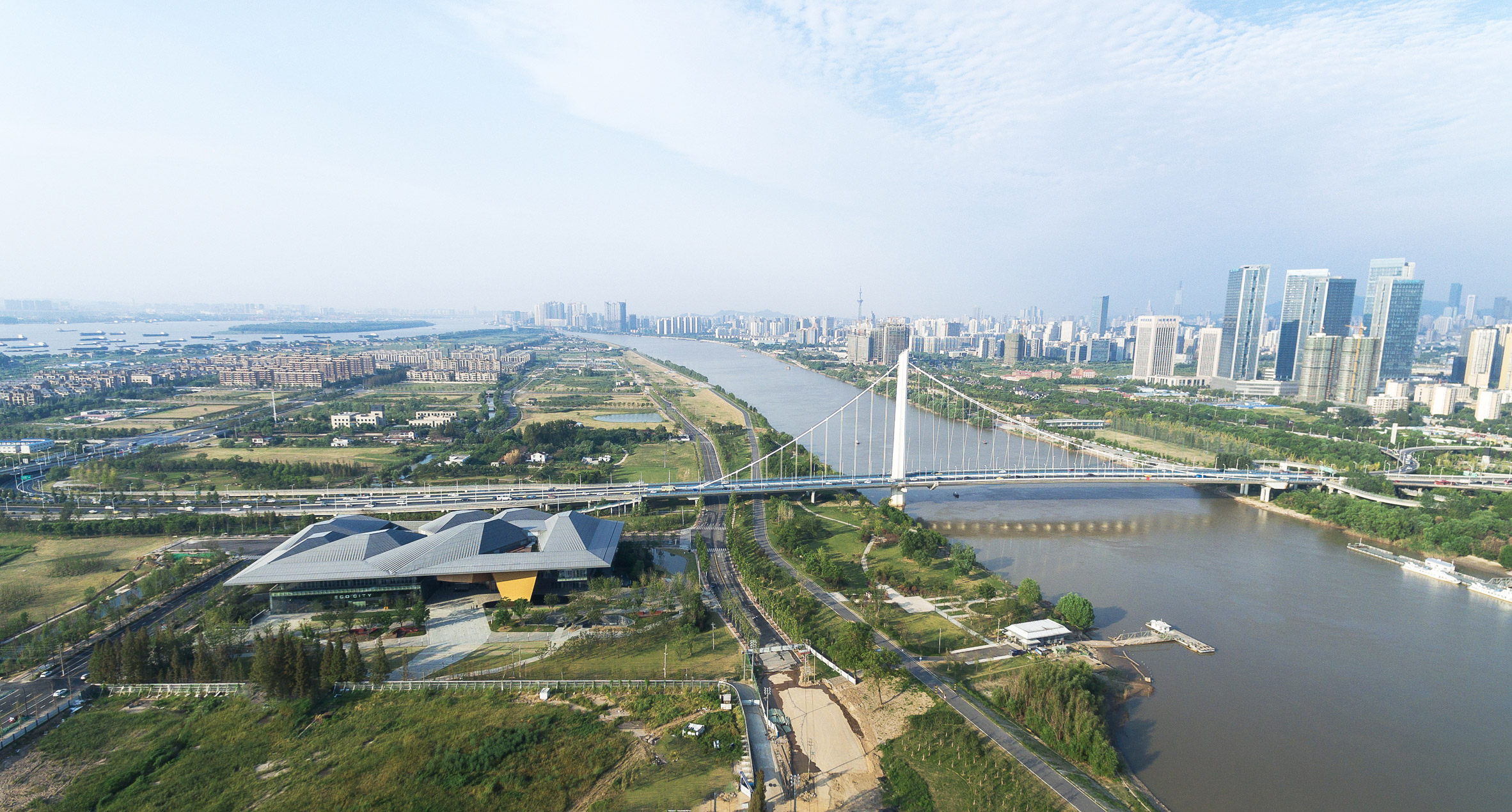 Skylights top eight angular peaks on the roof of this exhibition centre in the Chinese city of Nanjing by architecture firm NBBJ, funnelling natural light down into the interior.

The Nanjing Eco-Tech Island Exhibition Centre was designed by NBBJ as part of a masterplan that will see an island in the Yangtze River transformed into a sustainable park and campus for high-tech innovation.

NBBJ is overseeing the development of the 13.4-hectare site, which is situated around 6.5 kilometres from the city’s downtown area and across a bridge from a new central business district.

The campus aims to act as an incubator for technology and environmental companies, with the exhibition centre set to be joined by office research buildings and housing.

The exhibition centre is the first building to be constructed as part of the new park, and its dramatic roof is also the first thing visitors see from the adjacent elevated bridge.

“As part of the design, a horizon line separates earth from sky,” said the architects. “Yet the symbolic roof overhangs also shade the entire building from direct solar gain.”

“The concept of the exhibition hall design is one of optimism in looking towards a better future – toward the horizon line – which defined the formal massing approach of an interaction of architecture and landscape creating harmony between man and nature.”

The huge roof features eight peaks that reference the outline of nearby mountain ranges. Each of the angular protrusions incorporates an oculus that enables light to descend deep into the building.

The open-topped structures will be echoed in the forms of the eight office research buildings that will eventually be constructed around internal courtyards on a nearby plot.

The ground floor of the centre contains exhibition spaces, a lobby, a conference room and a small auditorium. A public plaza extends out from the entrance to meet the landscaped park in front of the building.

The first floor accommodates additional events spaces alongside an office, while more offices are positioned on the two storeys above.

The funnels on the roof direct natural light down into areas used by both visitors and tenants. Bright-red glossy tiles lining their inner surfaces diffuses the light as it filters down into the building.

Light studies were conducted to determine the optimal configuration of the roof so its overhang provides passive solar shading during the summer months, and allows plenty of daylight to enter during the winter.

Wooden panelling applied across walls and ceilings both internally and externally creates a sense of continuity between the public areas on either side of the glazed entrance.

A suspended staircase with glass balustrades and an illuminated underside forms a feature in the large skylit atrium.